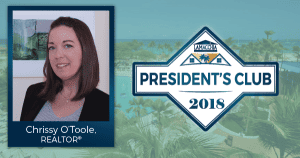 November 15th, 2018 – Lamacchia Realty is happy to announce the newest member of their President’s Club, Chrissy O’Toole.  This is the first time Chrissy has made President’s Club and we could not be more excited for her! So far this year, Chrissy has had 33 transactions and counting.  She works with buyers and sellers in Middlesex & Northern Worcester County areas. Chrissy has grown her business exponentially since joining the company in late 2013 averaging over 25 transactions per year, has served on the company’s advisory committee, and is often spotted on the company’s monthly Top Agent list!

“I am beyond excited for Chrissy and very proud of her! To see what she has done with her business over the last four years by growing it consistently, has been extremely impressive.  Based on the way she runs her business I am confident that things will continue to grow and she will continue to put her clients first. I look forward to having her with us in Aruba.” –Anthony Lamacchia, Owner Lamacchia Realty

The Lamacchia Realty President’s Club was announced last year where qualifying members are recognized in select marketing collateral throughout the year and will be sent on an all-expense paid trip.  Members of the 2017 President’s Club, along with a portion of the Leadership Team and the Employee of the Year, flew to Hotel Riu Palace Antillas in Aruba in April of 2018 and the trip was such a success that 2018 members be vacationing at the same resort in Spring 2019.