In this “Your Town” report we are taking a deep look into Woburn as a whole and looking at sales numbers for 2014 versus 2013, along with how the towns along its borders did, as well as what’s currently on the market in town right now. 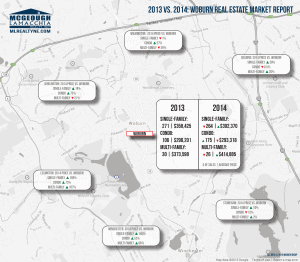 Overall, the housing market remained relatively strong in Woburn in 2014, with a total of 465 homes sold at an average sale price of $366,857.  The 465 number includes single-family homes, condominiums, and multi-family homes.  That meant a nice increase in the overall average home price, with homes selling for 6.4% more than in 2013. 58 more homes sold in 2014 than in 2013, which is a very good sign for Woburn especially considering the fact that overall home sales in Massachusetts were down 1% in 2014. The biggest reason sales were up in Woburn was the sale of 47 condo units at Newbridge Village on Main Street.

Breaking down the numbers:

Next, looking at the towns that Woburn shares a border with, we see that the town remains affordable compared to Lexington, Burlington, Stoneham, Winchester, and Reading, where a single-family home can cost up to $658,899 more when you look at average sale prices (see graphic above for a breakdown by town).  Wilmington comes underneath Woburn’s average price for a single-family home by 1%, remaining in the same ballpark.

With interest rates in the 3.75% range right now, and very few houses on the market in Woburn, there are positives for both buyers and sellers — buyers can take advantage of the lower interest rates, and sellers benefit from there being a lower supply, which has resulted in higher prices in many cases.

With inventory sure to rise after the current winter storms subside, now is the time to list your home if you are considering doing so, especially with housing inventory levels at their lowest point in 11 years.

Woburn is a mixed residential and light-commercial community of 38,120 according to the 2010 US Census, located in Middlesex County at the intersections of Routes 93, 95, and near Route 3.  This makes it an ideal commuter location for those who work in Boston or the surrounding area, with a short 26-minute drive into the city.  The city was first settled in 1640, and features open areas such as the Horn Pond Recreation Area, with access to the pond, hiking and nature walks, and more, along with other parks and spaces.  Many dining options are available in-town, and the town features a shopping area in its center with a variety of stores.  With so much available, and so close to Boston, it’s no wonder that Woburn remains a highly desirable place to live and own a home.