In this “Your Town” report we are taking a deep look into Natick as a whole and looking at sales numbers for 2014 versus 2013, along with how the towns along its borders did, as well as what’s currently on the market in town right now. 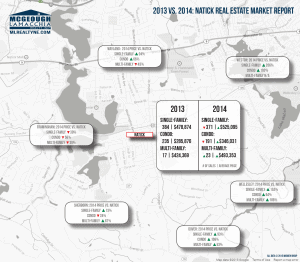 Overall, the housing market remained relatively strong in Natick in 2014, with a total of 585 homes sold at an average sale price of $454,826.  The 585 number includes single-family homes, condominiums, and multi-family homes. That meant a huge increase in the overall average home price, with homes selling for 12.83% more than in 2013.  51 fewer homes sold in 2014 than in 2013, which is part of a trend that contributed to overall home sales in Massachusetts down 1% in 2014.

Breaking down the numbers:

Next, looking at the towns that Natick shares a border with, we see that the town remains affordable compared to Wellesley, Dover, Weston, Wayland, and Sherborn, where a single-family home can cost up to $1,085,599 more when you look at average sale prices (see graphic above for a breakdown by town).  Framingham comes underneath Natick’s average price for a single-family home by 30%.

With interest rates in the 3.75% range right now, and very few houses on the market in Natick, there are positives for both buyers and sellers — buyers can take advantage of the lower interest rates, and sellers benefit from there being a lower supply, which has resulted in higher prices in many cases.

With inventory sure to rise after the current winter storms subside, now is the time to list your home if you are considering doing so, especially with housing inventory levels at their lowest point in 11 years.

Natick is a mixed residential and commercial community of 33,006 as of the 2010 census.  Settled in 1651 and incorporated in 1781, the town boasts a broad variety of attractions including open spaces, boating on Lake Cochituate, extensive shopping and dining options at multiple restaurants and the Natick Mall, and much more.  With its location along Routes 9, 30, and the Massachusetts Turnpike, a short 40-minute drive into Boston makes Natick a highly attractive location for commuters, along with access via a commuter rail line. Overall, the combined amenities that the town offers make it no wonder that Natick remains a highly desirable place to live and own a home.