Why You Should Trade Up Now Rather Than Later

If you’re planning to trade up from your current home, don’t wait.  Last spring we talked to Fox 25 News about how low housing inventory was due in part to home sellers waiting for values to go up.  For example, a homeowner buys a home for a certain price, invests in upgrades to the home, and then won’t sell the home for less than this number because they think they will “lose” out on the money they have put into their home.

Here it is a year later and we still say don’t wait: the best time to trade up your home is now and here’s why:

As of today the interest rate for a 30 year fixed mortgage is 4.49%. If you wait until the end of the year to trade up, you could pay a full point higher because rates are expected to rise to 5.5% by the end of 2014.

Taking advantage of low interest rates is not the only reason you should trade up now. Homeowners who wait for values to rise before they put their home on the market must remember that values will rise for both the home they’re buying as well as the one they’re selling. That means if you wait, you could be priced out of the home you want.

As you can see from this chart, in all but one county across the state the average selling price for a home has gone up. 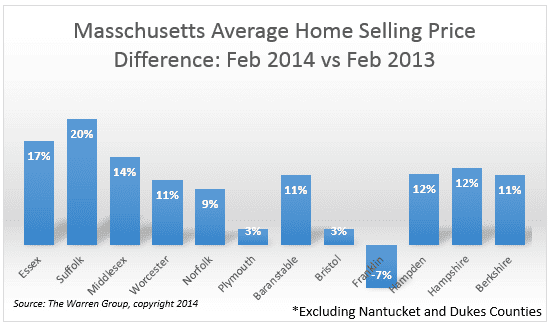 Waiting to Trade Up Will Cost You

Let’s say in 2013 you lived in Middlesex County and your home was worth $300,000 and you wanted to purchase a larger home for $400,000. But you waited because you wanted to get more money for your home.

But today the mortgage for the same home would be $410,400. Which means you would pay over $400 each month more for that home.

For people wanting to trade up to a larger home because of a growing family or the need for more space, trading up now will save you money in the long run rather than waiting another year.

Low inventory of homes continues to push prices for homes up across Massachusetts. As of today there are just 19,509 homes on the market, 2% fewer than were on the market this time last year when there were 19,931. Although new construction is taking place, it’s not enough to keep up with demand.

We saw total average home prices for the year 2013 rise 7.4% compared to 2012, and prices are expected to rise 6% this year. This means next year the home you want will be thousands of dollars more, and with interest rates expected to rise a full point higher, your monthly mortgage payment will be higher as well.

So if you’re ready to trade up to a larger home, take advantage of the housing market conditions now.