Fall is the second busiest time of the year for the housing market and we’re seeing that come together but there is one change in the market that needs to be noted and that’s the inventory levels.

Lack of inventory was a major factor in the early spring 2014 housing market. Since there was pent up demand for homes and fewer homes to choose from, we saw many properties get multiple offers. Lower inventory also caused home sale prices to rise dramatically in many areas. We don’t expect to see this trend continue this fall. By the end of March housing inventory numbers began to top last year’s inventory numbers, and the year over year monthly price increase gaps began to narrow. 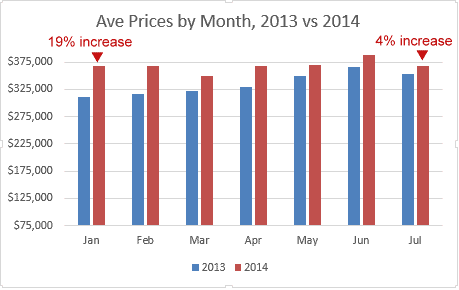 Overall home sales in Massachusetts dropped 4% in July compared to July of 2013. Final numbers aren’t in yet, but it looks like home sales in August will be down as well. According to the latest data provided by MLS*, there were 7,497 homes sold in Massachusetts last month compared to 8,144 in August of last year, a decrease of 8%. Another indication that the market has slowed is that mortgage applications are down. According to a report from the Mortgage Bankers Association, for the week ending September 5th, the Market Composite Index, a measure of mortgage loan application volume, decreased 7.2% on a seasonally adjusted basis from one week earlier, to the lowest level since December 2000. So we are definitely seeing a slowdown in the market that started in late spring.

For months home sellers have heard reports on the news about home price increases, and some have even seen homes in their area sell for way over asking price. With so much talk of home prices going up, more home sellers are putting their homes on the market. The problem is many are overpricing their homes. This means there will be more homes to choose from, but they’ll be at prices that won’t attract buyers. As we said, fall is the second busiest season for home buying, but there isn’t as much demand as in the spring, and recent sales data shows a slowdown of the market. Less competition for homes and less demand will cause home prices to decrease. This shouldn’t come as much of a surprise. Historically, home selling prices tend to be lower during the fall months. But we actually expect it to be a bit worse this year. Last week Banker and Tradesman put out a great chart that shows the median prices for single-family homes in Massachusetts from 2010 to 2014. In this chart you can see that selling prices tend to be lower during the fall months. 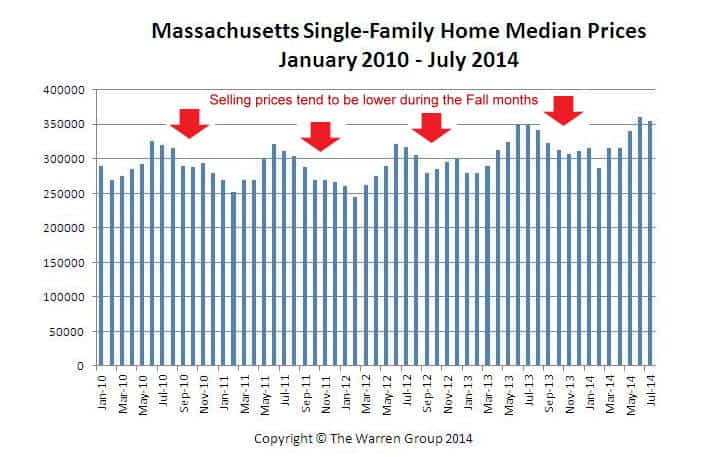 What Does This Mean for Home Sellers?

Home sellers need to be more realistic about pricing their homes. This fall buyers already have more homes to choose from so sellers must be careful not to overprice their homes. Sellers may think they can get much more for their home than the market will allow. To attract more buyers to your home, it’s important to price it competitively. Work with a Real Estate Agent to run a competitive analysis of what homes are selling for in your neighborhood.

What Does This Mean for Home Buyers?

The good news is this is best fall to buy we’ve seen in a few years. There will be more homes to choose from, and mortgage interest rates are still low. Rates for a 30 year fixed have stayed in the low 4% range for months, making home ownership more affordable than renting in many areas. To get the most out of these market conditions work with a Buyer’s Agent to guide you through the entire process, and also get pre-approved before you shop for a home to determine how much you’re qualified to borrow.

Previous article
How to Make Money at a Yard Sale
Next article
Anthony Explains Why the Fall Housing Market Has Changed on Fox 25 News
Tags: