Welcome to our first ever Lamacchia Realty South Florida Housing Report!  We have been producing monthly reports in Massachusetts, and New Hampshire for over ten years.  Anthony is often quoted in many local and national Real Estate news reports with his predictions about the market, so he and his marketing team are all very excited to now be producing reports in South Florida.  After years of Lamacchia Realty continuously relocating buyers to South Florida the entire company is excited to now officially be doing business here.

This extensive report breaks down Single Families and Condos for Palm Beach, Broward, and Miami Dade counties for the 2020 market performance as compared to 2019 and even has data for a few years prior to provide you with a reference point.

When the pandemic hit, many feared that 2020 would be the immediate start of another housing crisis with prices crashing and inventory climbing through the roof, but the opposite happened as we clearly predicted in the “This Is NOT 2008” blog and video last April when this all started.  Though a lot of the stats in this blog were based on data from Massachusetts, the same story was true throughout the country, and South Florida was no exception. Inventory needed to go up dramatically to have home prices go down and that clearly didn’t end up happening.

You will see in the graphs below that the year started off with each month beating 2019 in every county in both Single Families and Condos and then dropped off when Covid hit hard in April just like everywhere else in the nation.  When travel came to a halt places like South Florida were even more impacted for a few months because the out-of-state buyers slowed down.  There were many other logistical delays in the months following that also caused a log jam in the real estate supply chain and delayed sales. Sales from March until July declined due to the shutdown but the rest of the year, once safety protocols were put in place, displayed a booming real estate market in all three counties which is why sales were able to catch up and beat 2019 month by month from August on. The three graphs below have all Sales by month Including Single Families and Condos for Palm, Broward, and Miami Dade Counties: 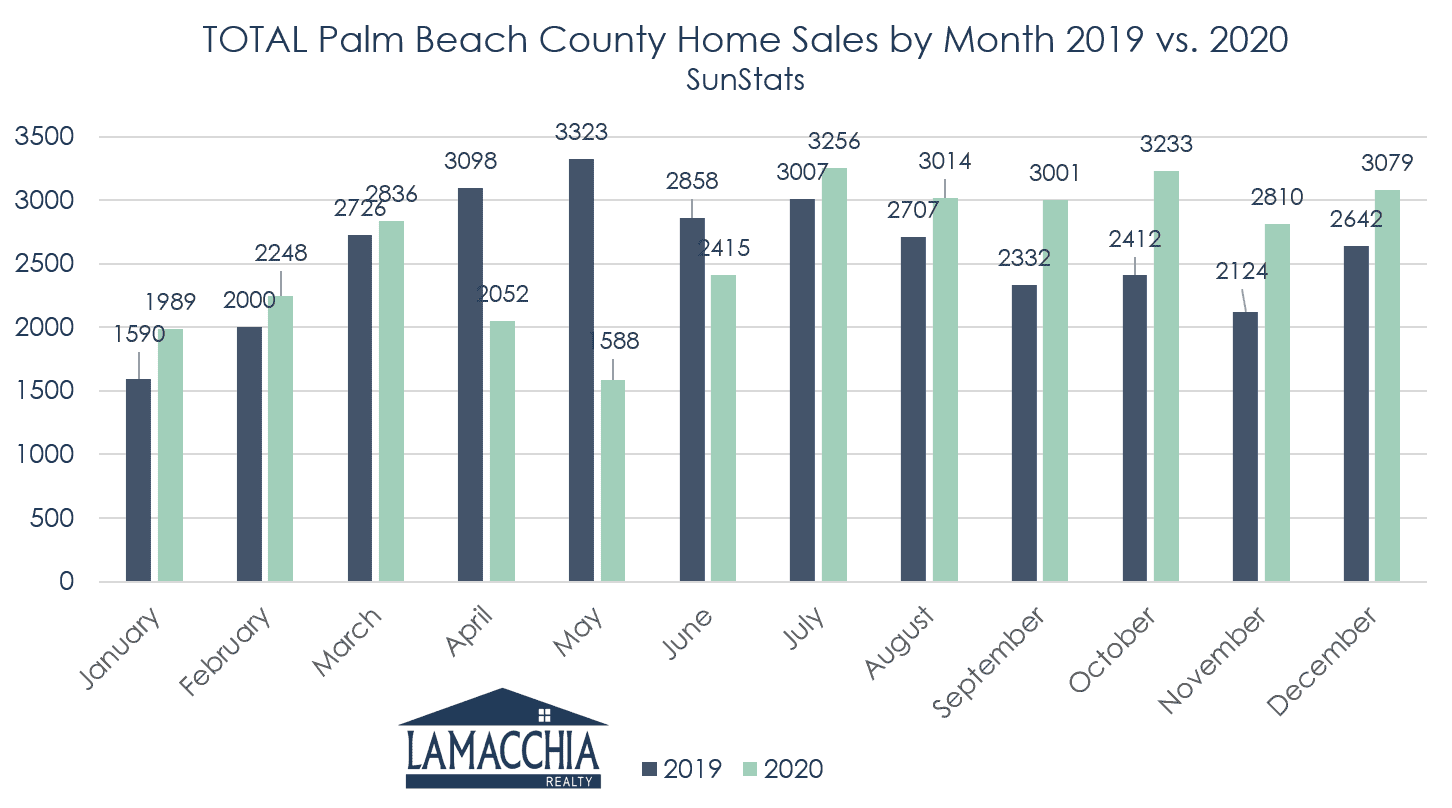 Overall sales for the year in Palm County were up 2.2% over 2019. If you were to break condos and single families apart you would see that: 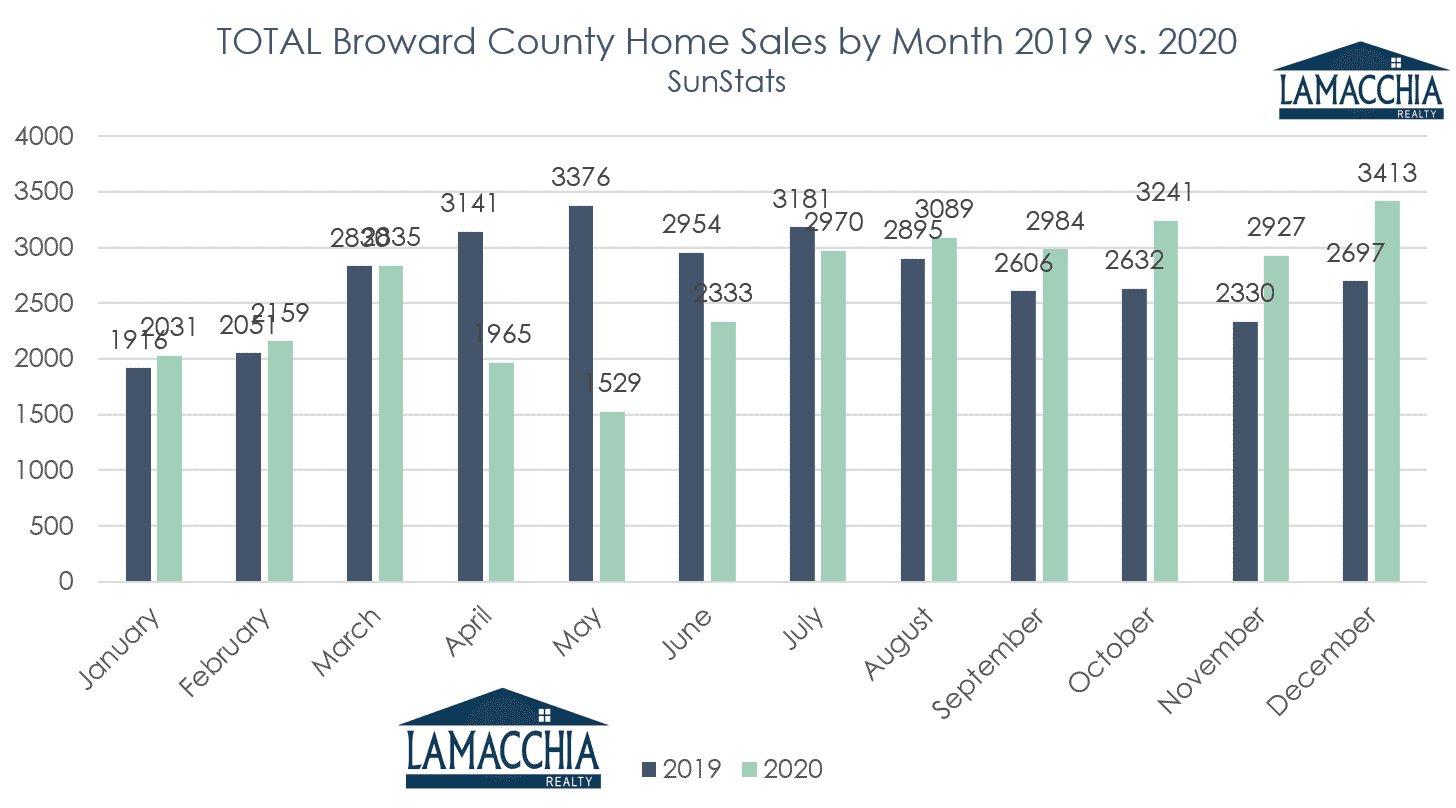 Overall sales for the year in Broward were down 3.4%.   If you were to break condos and single families apart you would see that: 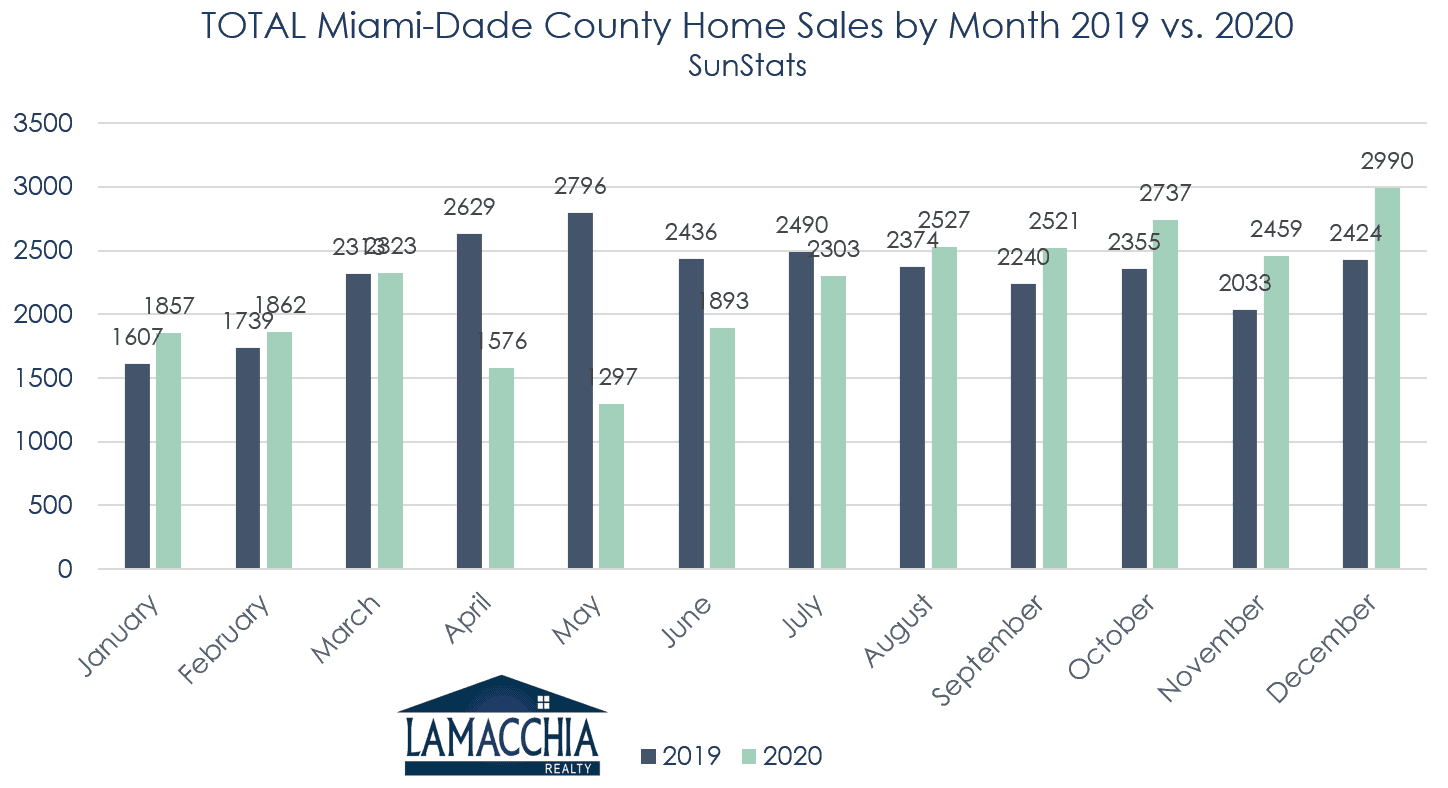 Overall sales for the year in Miami-Dade were down 3.9%.   If you were to break condos and single families apart you would see that:

Miami got hit the hardest of the three counties when it comes to total sales. This is due to the decrease in South American buyers during the travel ban and those purchases stayed low even after it was lifted, but this won’t last.  Condos sales were down in all three counties but actually not down nearly as much as in most northern states and that’s because once things settled down in the summer, more northern buyers came down than normal to escape.

Prices in All Three Counties

Average prices rose in all three counties for both Single Families and Condos proving all the naysayers wrong who initially predicting prices would fall.

The three graphs below show average sales by month Including Single Families and Condos for Palm, Broward, and Miami Dade Counties: 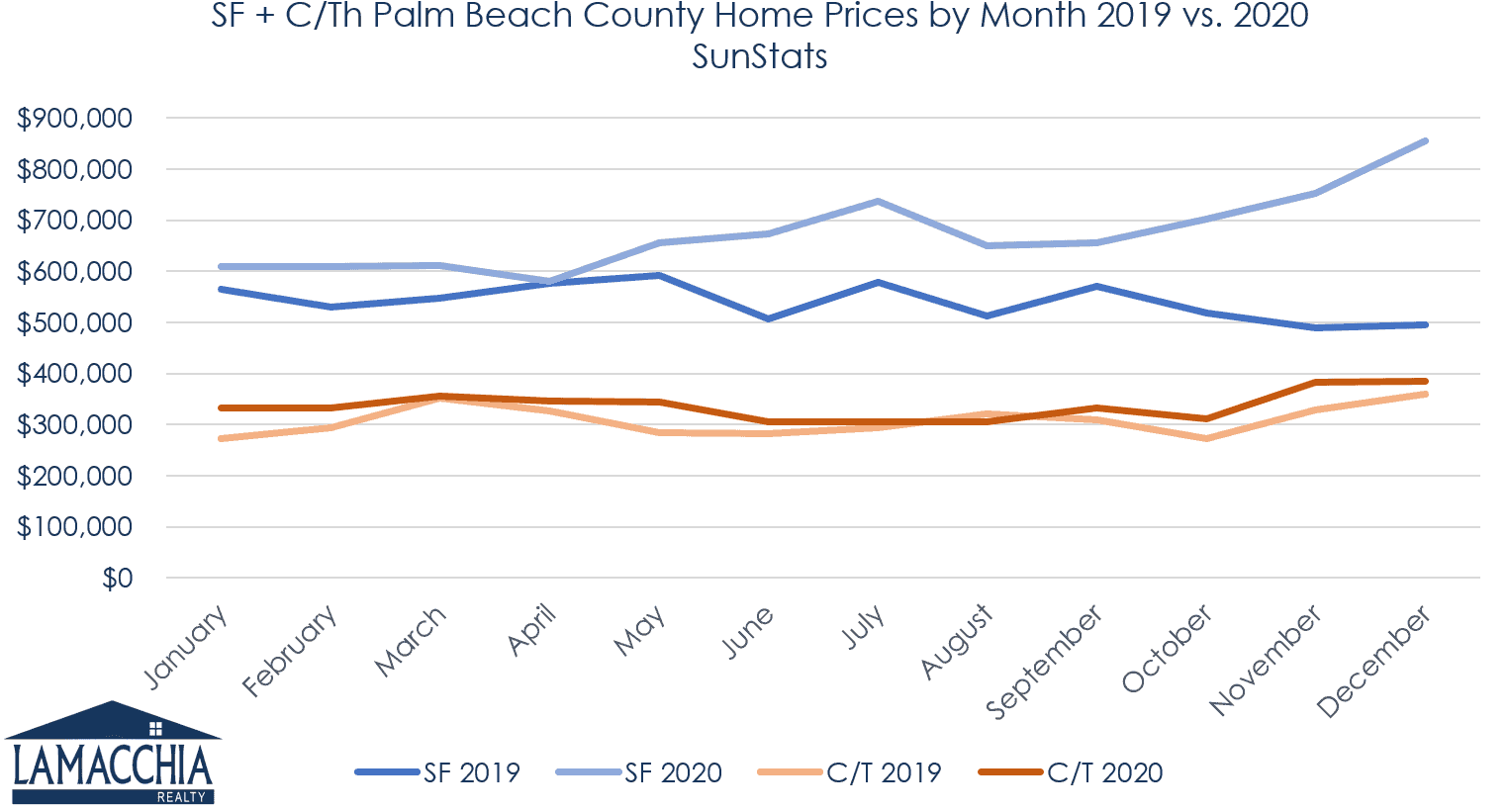 Overall average prices for the year in Palm were up 17.2%.   If you were to break condos and single families apart you would see that: 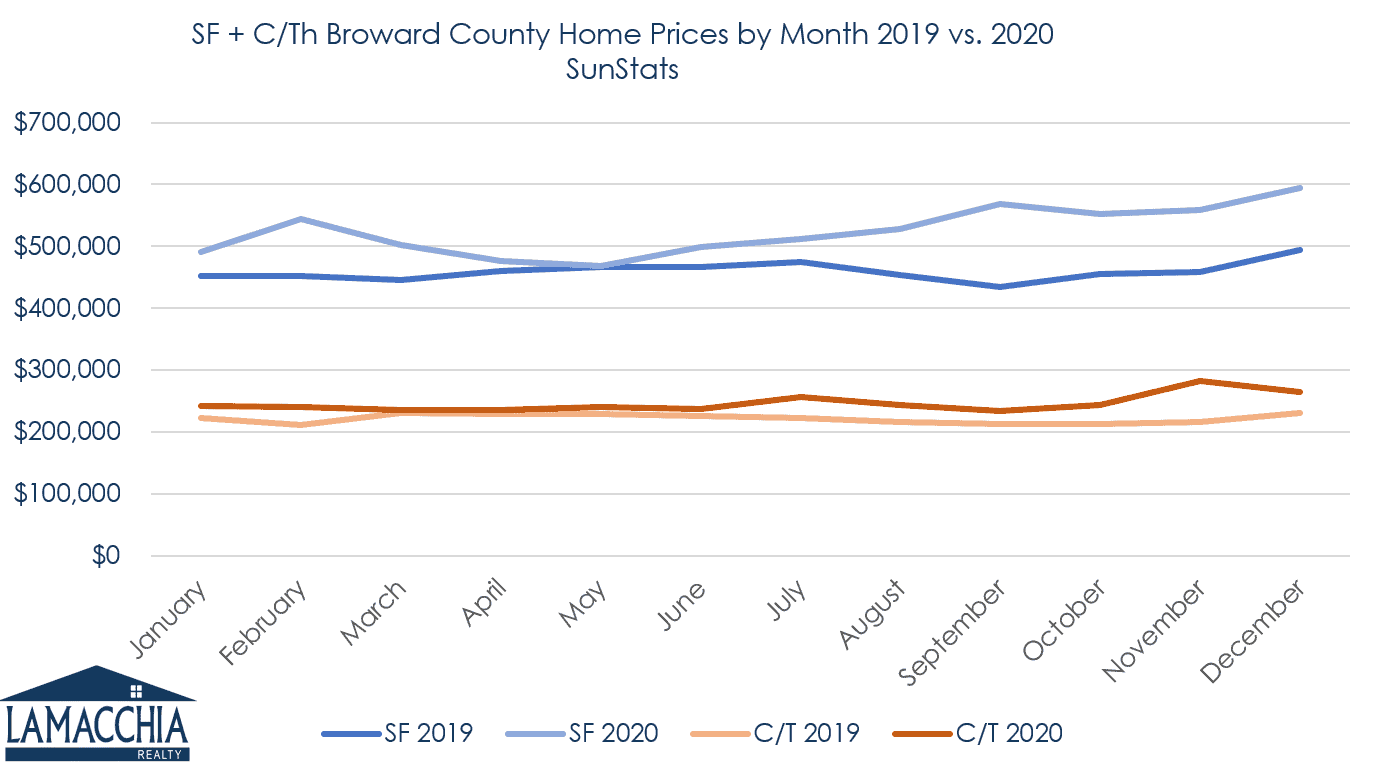 Overall average prices for the year in Broward were up 12.7%.   If you were to break condos and single families apart you would see that: 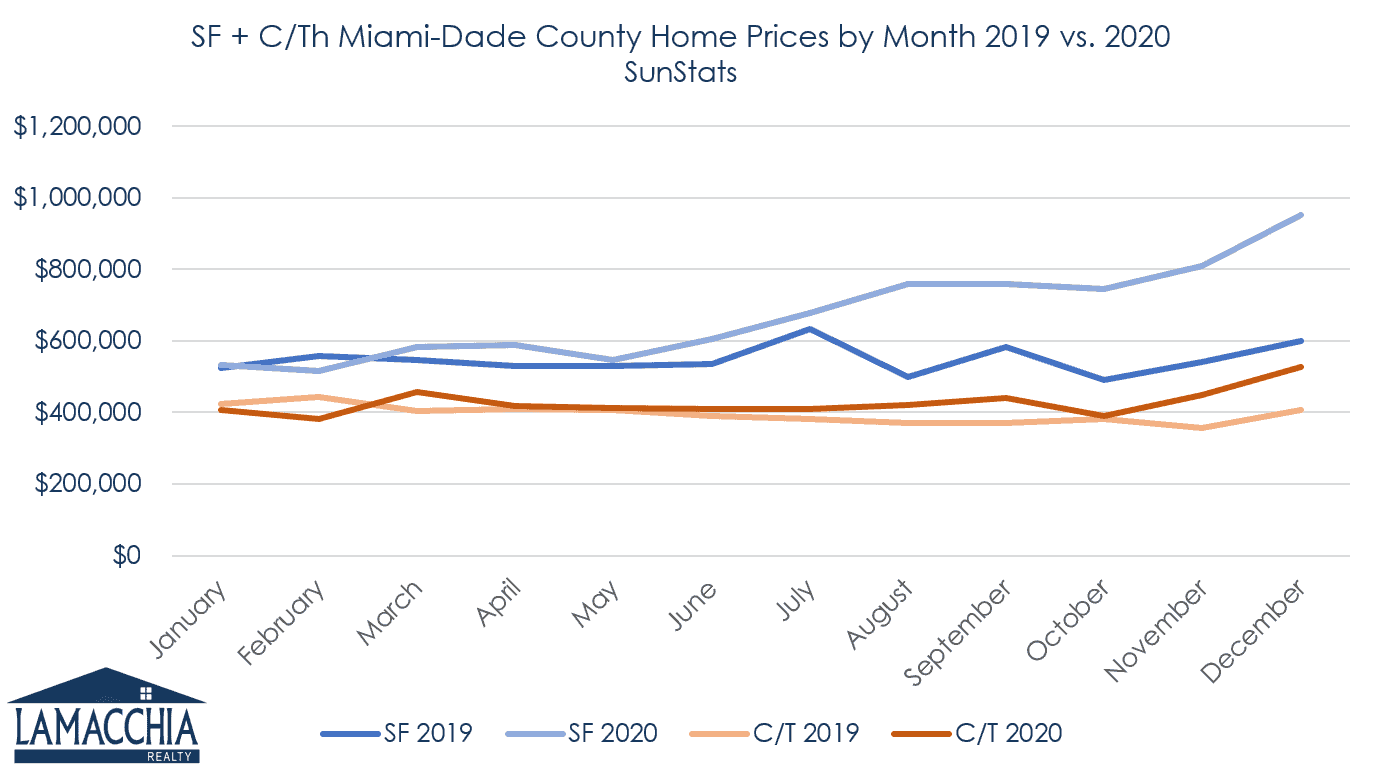 Overall average prices for the year in Miami Dade were up 15.3%.   If you were to break condos and single families apart you would see that:

Average prices overall for all three counties for both single families and condos ended the year 15% higher than they did in 2019.  This illustrates how strong the demand for homes is this year.  It also shows how the lack of inventory for buyers to buy creates competition, drives bidding wars, and raises prices.  The graphs below illustrate the inventory of homes for sale by month over the last four years.  You will see that 2020 was a year that really stands out.

The six graphs below illustrate the flow of the number of homes for sale for all three counties broken down by Single families and Condos by month for the entire year.

As you can clearly see after reviewing these the number of single families available to buy was noticeably lower the entire year especially once the virus really hit.  This lack of choices for buyers created bidding wars and is what drove prices up. By why was inventory so much lower for single families and why did it go down more once the virus hit?  Let’s take a look at the number of homes listed for sale by type, by county, and by month below.  You will see the correlations.

Overall homes listed for sale including Singles and Condos for all three counties was down 3.6% from 2019 and 9% from 2018.  So, this is clearly a trend that started before the virus but only worsened once it hit, particularly among single families which saw most homeowners stay in place once it hit not wanting strangers coming into their home, and therefore not listing their homes on the market. 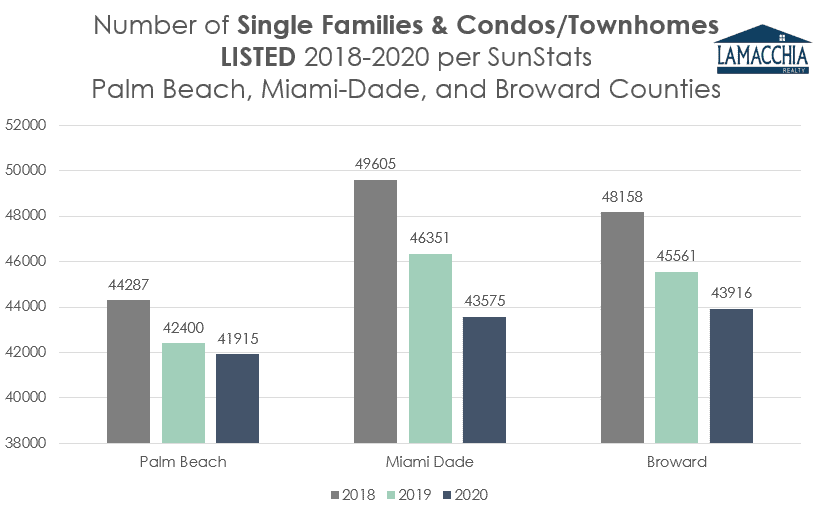 Pending sales are up everywhere. With more contracts accepted year over year, and the number of listed properties down for all three counties, it’s clear why inventory is down.  Supply can’t keep up with demand. If more homes were listed, with such buyer motivation in 2020, sales would definitely have been up.

Pending’s being up is always a sign that sales will be up as these accepted contracts will for the most part all turn into closed sales, except for the few deals that may fall apart. 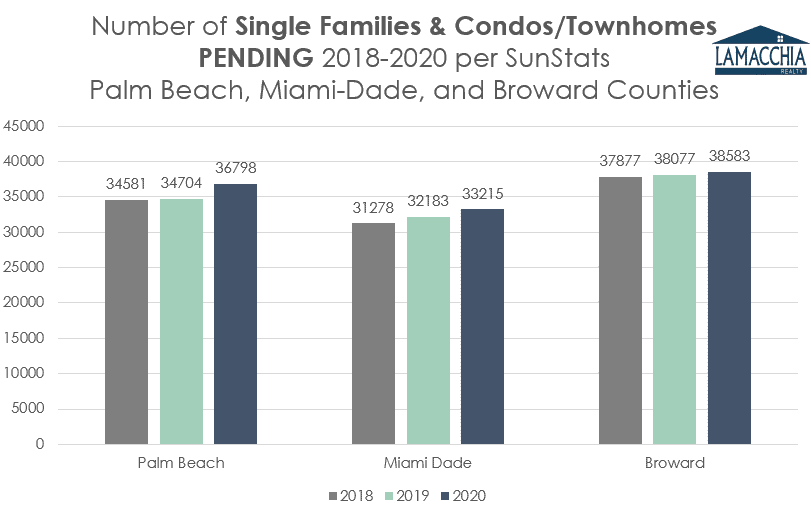 Overall homes pending was up in all three counties 3.2% with Palm Beach being the leader of the three.

As shown in all the data, the market is strong by almost every metric.  Miami-Dade County has the largest influence from international buyers coming from South America, and Broward County is second to Miami-Dade. This is why Miami-Dade didn’t perform as well as the other two counties, but it was still a strong year.  Prices in Miami-Dade were up 15.3% and though sales weren’t up that’s not the only way to measure the strength of the market.  There is no doubt sales will be up in 2021 once those restrictions are lifted incoming buyers will be very plentiful.

For decades, people all over the Northeast have been buying second homes and or relocating to South Florida for retirement.  However, over the past four months, we have noticed an increase in those out of state buyers from New Jersey, New York, Massachusetts, Pennsylvania, and now even incoming buyers from California.

All indications point to a massive year for the South Florida market in 2021. Loan limits have increased, mortgage rates are still low, vaccines coming out will make people more comfortable with listing and then the massive surplus of buyers will finally have properties to buy.  In addition, the floodgates of South American buyers are going to open back up which we are already seeing small signs of, but by summer that will be massive. South Florida will have the biggest year for home sales in at least five years and prices will continue to go up in all three counties.

Previous article
What Does Contingent Mean?
Next article
Tips for Selling Your Horse Farm
Tags: