On The Slopes in Bradford MA 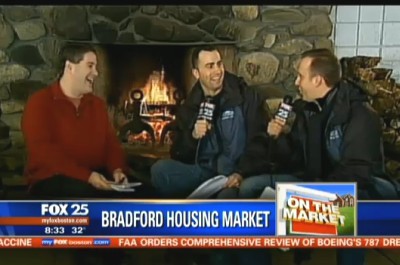 See more On the Slopes

And you may recognize these 2 faces sitting next to me, we’re On the Slopes but it’s time to go on the market John McGeough and Anthony Lamacchia from Lamacchia Realty …I was going to give you a promotion, but you dressed so shabbily for this performance this morning,

So I’m told! We’re at a ski mountain so I didn’t think I had to dress up

I’ll wear a suit next week!

He keeps a jacket on! We’re in front of a fire and he’s got a jacket on you’re going to be sweating.

You guys do a lot of business in this area. You know the Bradford market pretty well.

Are people buying up in this area?

No question this area has always been good to us and most agents sell in a reasonable amount of time so it’s similar to the average price point, is similar to, a little less than the Massachusetts average so it’s a little more affordability so really it’s a good market.

Jacket looks good on you too. I wasn’t excluding you.

I brought the scarf as well.

The scarf is a nice touch as well, you brought a little more class

This is what I’m dealing with every week.

Anthony and I were pounding donuts earlier, that’s more our style. He’s a little more classy.

They were good though.

Let’s talk about some of the places that you guys are looking at.

Absolutely, the first one is 633 South Main Street, it’s a ground up remodel, so it’s a 1900s home that was completely redone from  air conditioning, heating, hardwood floors, it has a brand new kitchen, it has an island—if Shannon was here she’d say girl loves her island!—

Exactly, so it’s a great opportunity, it’s on the market for $289,000. 3 beds 2 and a half baths, a great opportunity. It’s got a garage, and also just based on this cold weather it has sprayed in insulation. So it’s Icynene, you’ve got to have Icynene in the winter months, extremely efficient

It’s the most efficient insulation so if you’re looking into it we highly recommend it.

Get the President to help me out. He can take care of that for me.

The next one’s on 10 Fairway Drive, it’s on for $350,000, 2,300 square foot Colonial, 2 car garage, big back yard, it’s about a 16000 foot lot, but a real nice home big back deck overlooking the yard, big master suite, cathedral ceilings, his and her sinks in the bathroom so real nice place, and the cool part about it is it’s on a dead end, off of a cul de sac so it’s in a great neighborhood.

In his section of Haverhill to get the nice back yard that’s really nice.

By the way how hot are you in that jacket?

I’m getting warm now I might just take it off.

Cause I’m getting hot–That fire’s throwing the heat!

Any other banter before I get to the last one?

Oh I’m not done with him yet, in the meantime let’s go to number three

All right perfect, the last but definitely not least is 30 Bradford Green, this one’s on for a little more than the other two, it’s on for $406,000, but really an awesome opportunity, it’s almost 2700 square feet 4 beds 2 and a half baths and as you can see from the pictures, perfectly staged, 2 car garage, built in the 90s but actually we feel it’s better than new construction because you’ve had all the upgrades, professionally landscaped, every room has custom paint, molding, updated kitchen as well—

Absolutely and on a cul de sac as well.

And if you own this one under the new Obama definition you’re rich, it’s just over that $400,000

We’re not wading into that!

Which one’s the better skier by the way?

Definitely me! That’s why I’m dressed like this I’m going to go out and test my new skis. I’m pretty excidt

You’re coming to Loon next week?

Beautiful we’ll see you then you will need the jacket then.

They’re saying it’s going to be real cold up there,

John and Anthony it’s great to see you guys. McGeough and Lamacchia are going to be with us all winter as we go on the slopes! We look forward to spending some more time with you.