September Market Slower But Sales Still Up in MA

The September Lamacchia Housing Report presents overall home sale data and focuses on the average sale prices for single family homes, condominiums, and multi-family homes in Massachusetts and Southern New Hampshire for September 2016 compared to September 2015.  It also looks at other stats like Homes Listed and Pending, as they are often the best indicators for predicting future trends in the market.

September was a solid month in Massachusetts, with increases across all categories in both number of sales and average sale price as compared to September 2015. The total number of homes sold across the state in September 2015 was 8,234, and in September 2016 was 8,620 – an increase of just under 5%.

Average price growth was comparatively steady across the three categories, all varying within 2% points from the average, which was a little over 5%. The highest increase in price was in the multi-family category, with prices increasing from $397,769 in September 2015 to $424,521 in September 2016, an increase of just under 7%. 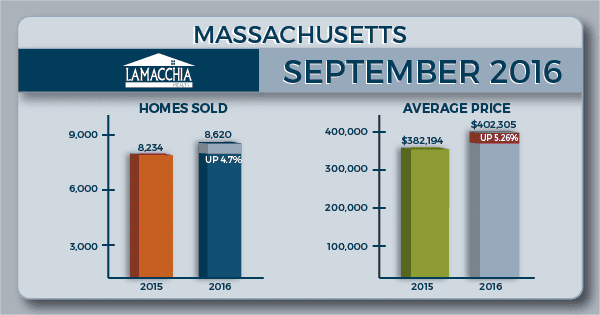 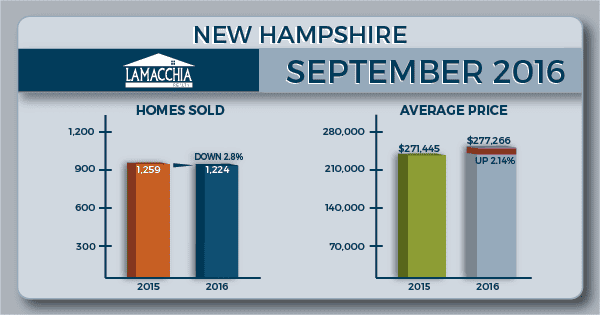 Unlike Massachusetts sales were down in Southern New Hampshire in September. Overall, sales fell just under 3%, with 1,259 sales in September 2015 dropped to 1,224 in September 2016. Single family homes and condos both fell a bit over 3%, while multi-families single-handedly pulled the average back up, with their sale numbers growing 9%.

September was a good month for the market, with increased sales after a very busy summer with strong activity market wide.  We believe that Brexit in late June gave the market an additional push as some buyers wanted to get in on the excessively low rates.

It appears that October home sales will be up over last year as well.  However, the current market is slower than this summer, and has been for almost a month, as we hit the October slowdown that we have seen the last three falls in a row.  This is why it is a great time to buy a home as we explained in last week’s blog, “Don’t Wait Until Spring, 4 Reasons to Buy Now!” We expect activity to pick up in the next week or two and stay busy until Thanksgiving, as it usually does at this time.  Anthony explained this in his Urban Update segment with Byron Barnet on 7News.