A REMINDER ABOUT SNOW REMOVAL LAWS

The snow has arrived! Here is a reminder if you’re a property owner in Massachusetts: by law, you must remove or treat snow and ice on walkways and plow parking lots. You can be held liable for injuries caused by snow and/or ice on your property.

Some Massachusetts property owners are still unaware of this law that went into effect in July of 2010. The law applies to all property owners, both commercial and residential, throughout the state.

In Boston, snow removal is required for the full width of the sidewalk or a minimum width of 42 inches.  You are allowed 3 hours after the snow stops to remove snow and ice. If the storm happens overnight, you are allowed within 3 hours after sunrise to remove the snow, even if the snow was moved onto your property from a city plow. Failure to remove snow or ice from the sidewalk will result in hefty fines for every day it is there.  Go to your city or town’s webpage for specific rules and fines, source.

Don't Throw Snow Back Into the Street

After large snowstorms, you may have to get creative to figure out where you’re going to put the snow. Throwing snow into Boston city streets is prohibited and will also result in fines.

Owners of vacant homes will have to keep walkways clear, too. Homebuyers and real estate agents showing your property should be able to walk on your property safely.

The law isn’t limited to city dwellers. Mail carriers, meter readers, and delivery service workers are especially vulnerable to slips and falls during the winter months, so be sure to keep your home’s walkways and driveways clear of snow and ice to help reduce the danger of serious injury. In fact, mail carriers will not deliver mail if your walkway is not cleared or if it is deemed unsafe. Homeowners may want to check their insurance policies to make sure they have sufficient coverage. 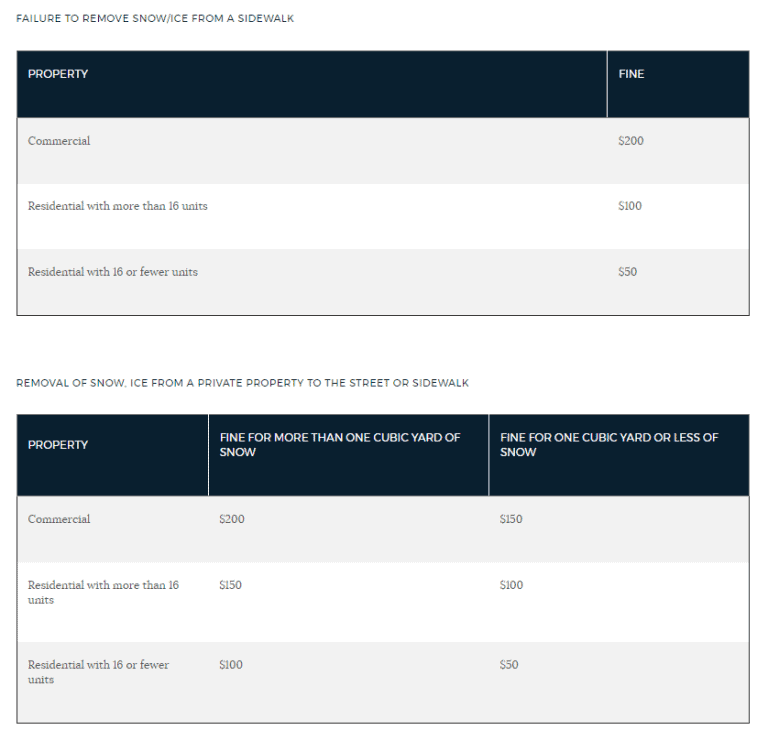 Sidewalks on public roads are maintained and cleared of snow and ice by the municipality at no additional cost to property owners, source.

Jessica’s Law was passed in 2002 after ice broke off a moving truck, hit a second truck, and caused it to crash into Jessica Smith’s vehicle, then 20 years old, killing her.  This law enables New Hampshire police to stop vehicles with snow or ice build-up and fine them anywhere from $250 to $500 for first offenses and up to $1,000 for subsequent offenses.

In Massachusetts, no specific law clearly directs drivers to remove snow and ice before heading out onto the highways. However other penalties exist.  Improper removal of debris on a vehicle earns a $35 citation, and snow or ice debris is considered debris.  Under a different motor vehicle violation, Massachusetts officers hand out $200 fines where it’s determined an unsecured load, such as snow endangers other drivers, source.

Remember- if you wait too long to shovel, the snow may turn to ice and be difficult to remove.  If you are unable to shovel yourself for health reasons, contact a neighbor or relative to find the best solution to getting your property cleared of snow and ice.

For the specific snow removal ordinance for your town, click the ordinances and bylaws for Massachusetts towns, find your town, and search for “snow removal.” If your town is not listed here, contact your local town or city hall for more information.