There has been a boom in building along the area in Watertown (and part of Waltham) known as the Pleasant Street Corridor. The interesting thing is, construction is focused more on luxury apartments than building condos. More than 700 rental units will be completed before the end of the year.

The Pleasant Street Corridor is long overdue for an upgrade. The area was once lined with run down industrial buildings, abandoned warehouses, and vacant lots. In July 2008, Watertown approved the Pleasant Street Corridor District, a zoning amendment aimed at revitalizing the one-mile industrial strip. The guidelines included plans to encourage mixed-use development, retail businesses, and enhance usable open space.

Development of multiple luxury apartment complexes in the Pleasant Street Corridor include:

The first phase of construction for the Repton Place complex produced 179 condos that were sold off back in 2006-2007, but phase two of the project resulted in the construction of an additional 206 apartments, which will be available in May. At Riverbend on the Charles the last phase of 40 units will be completed on April 15th of this year.  At Alta at the Estate, 7 townhouses were completed last month and the rest will be completed by June.

New developments like these luxury apartments with 6 or more residential units must set aside at least 10% of the units as affordable housing, with eligibility requirements set at 80% of the median income for most of the units, and 70% for the remaining units.

Builders are taking advantage of the fact that low housing inventory is pushing up rental prices. We believe the explosion of luxury apartments with high rents will eventually put negative pressure on all rents in the area for a year or two until all of the units are absorbed.

In January of this year, the Metropolitan Area Planning Council published an assessment of Watertown’s housing needs which suggested ways to improve affordable housing production. The assessment also outlined the need for building a mix of housing types with an emphasis on building more owner-occupied units.

Back in 2007, plans to expand the Pleasant Street Corridor outlined the need for mixed use development, which meant in addition to residential construction there would also be plans to build retail shops, restaurants, research and development facilities, as well as office space.

But after the financial crisis it’s been harder for small businesses to get loans, so mostly large residential developers are building, which is one reason why there are few shops and restaurants in the Pleasant Street Corridor. Another reason is that the zoning process in Watertown has allowed for residential projects to move quickly to encourage developers to transform unused industrial lots into housing and commercial development.

Some residents feel there are too many large residential projects and not enough of a variety of new projects that would attract small businesses and support a diverse housing stock. So last month, the Town Council proposed making changes to the current zoning process, which could slow the growth of luxury apartment construction and would include plans for more commercial projects along Pleasant Street. 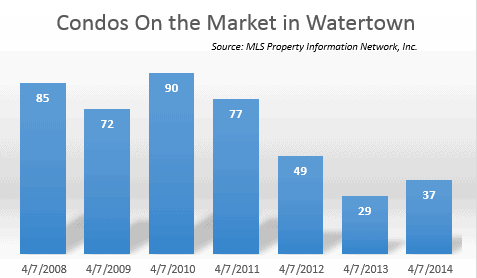 Previous article
John and Anthony on Why The Boston Condo Market is Red Hot
Next article
Highest and Lowest Property Tax Rates in Greater Boston
Tags: