The Lamacchia Housing Report presents overall home sale statistics and highlights the average sale prices for single family homes, condominiums, and multi-family homes in Massachusetts and Southern New Hampshire for November 2016 compared to November 2015. It also looks at other metrics for Massachusetts like Homes Listed and Pending, as they are often the best predictors of future trends in the market. 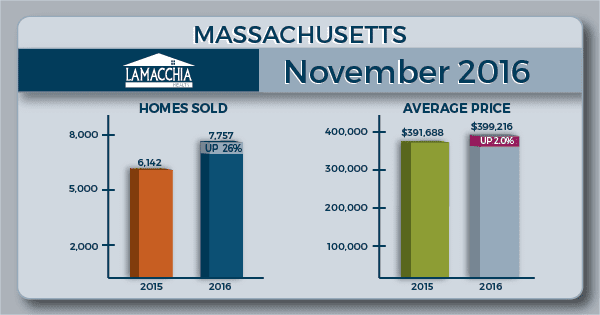 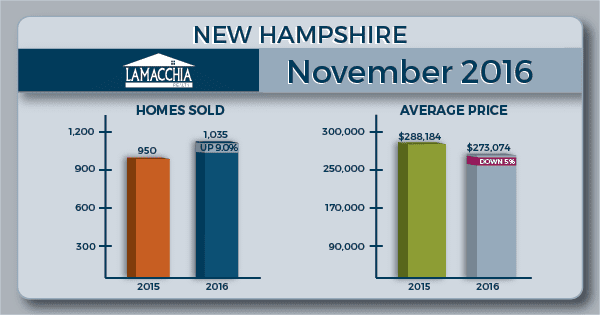 There were 7,004 homes that went pending in November 2016 in MLSPIN compared to 6,762 in November 2015, which represents an increase of 3.5%.  This was very good news considering the spike in mortgage rates immediately following the election. Rapid increases in rates typically cause a slowdown in buyer activity but it didn’t in November.   Pending sales being up in November contributed to housing inventory being down even more in December as we had less inventory than any year since 2000.

November marked another strong month for home sales as it was the 9th month in 2016 with an increase in home sales as reported in our monthly housing reports.  In addition, by November 30th Massachusetts reached a total of just over 85,000 home sales.  This means that once December is over and the year is completed we will beat 2006 which had 88,000 home sales.  This will mean that 2016 will be the biggest year for home sales since 2005 as we predicted in our 2015 Housing Report.  The market in December has remained active and all signs point to a very busy winter. The only wildcard is Mortgage interest rates which have increased a full point since the election. So far, we have not seen a slowdown from it but that could happen as Anthony explained in his market update video on December 22nd.