If You Wait to Buy, You’ll Pay More!

It’s Fall again, and like clockwork despite the disruption of COVID-19, buyers are wondering what is wrong with homes that aren’t selling immediately!  It’s incredible how this happens every year, especially after buyers spend the first seven months of the year wishing homes would stay on the market longer than a couple of days. Yet, as soon as they do and buyers find the home they like, many will ask “what is wrong with it?”  It is literally the perfect home for them, but they still wonder why nobody else “wants it.” Always incredible how human beings only want what others want.

Think you will pay less in the spring?  Think again.

As you can see in the graphic below, it is abundantly clear that homes sell for more in the winter/spring than in the summer and fall.  This is obvious when looking at on a large scale of averages like this graph, but we decided to take it a step further and zero in on the actual homes that were unsuccessful on the market in the fall of 2019 and then re-listed after the first of the year in 2020 and sold for more. We randomly picked homes in nine of the cities and towns where we have offices. In each one of these towns, there were a significant amount of homes that sold for more in the winter than when they tried to in the fall.

Below are examples from each town: (click to enlarge) 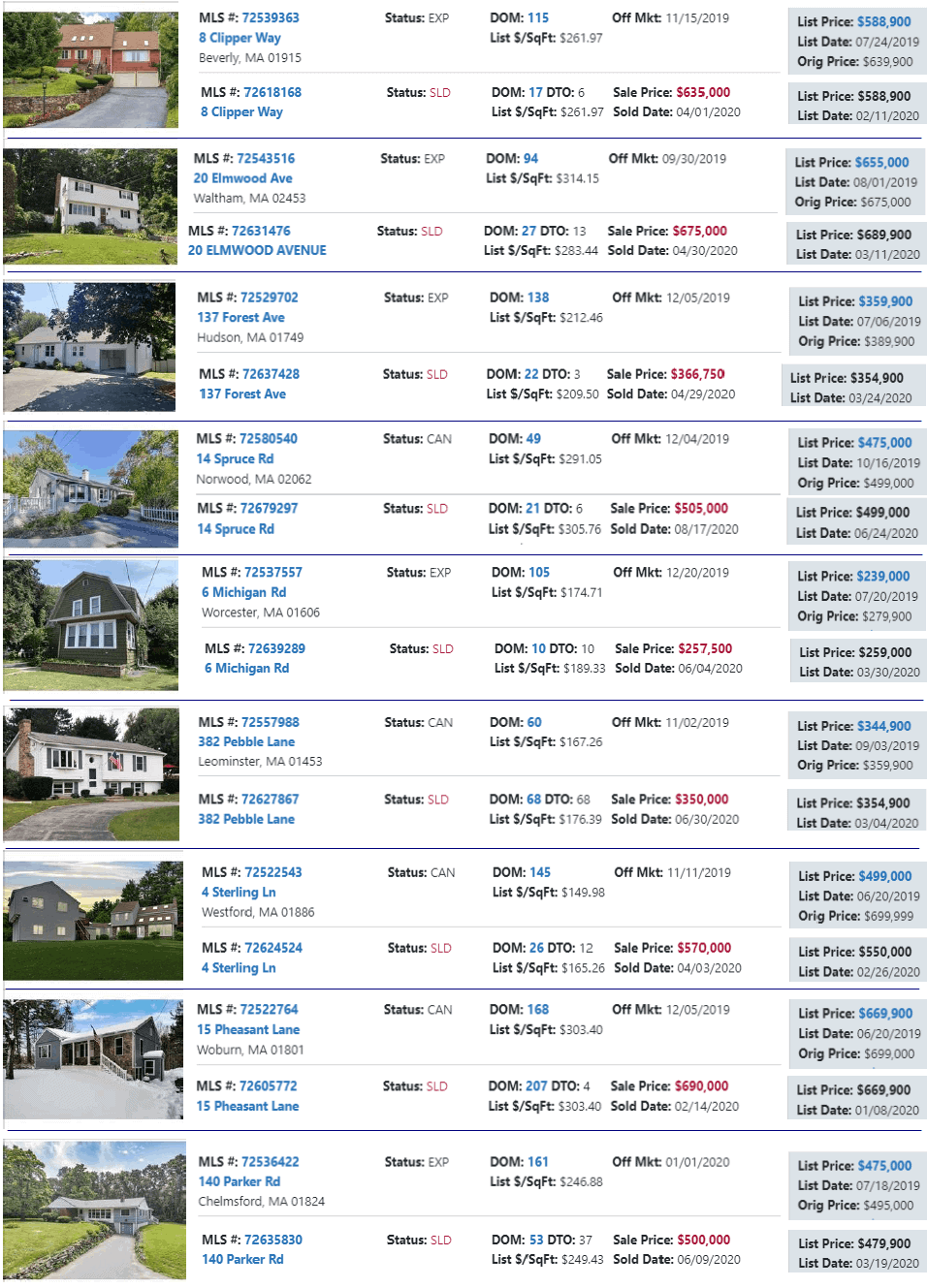 The absolute truth is NOTHING is wrong with THAT House.  The fact that a property has lingered on the market a little longer than earlier in the year has nothing to do with the house itself!  It has everything to do with all the other houses that have been listed as inventory begins to increase. Real Estate markets are very simple; they are all about supply and demand!  The more supply there is the more choices buyers have and the more time they take to make offers.

As we explain, every year fall is truly the best time of year to buy a home because of the inventory of homes for sale that peaks in late September into early October.  Last year was the best fall to be a buyer since 2014. This year, though, is an entirely different story because of the impact that COVID-19 had on the market by decimating inventory.  Many sellers hesitated to list due to market and safety concerns and so motivated buyers had the least amount of homes to choose from EVER.

This graph below shows the weekly inventory year-over-year back to 2014 and how 2020 was greatly affected by the pandemic: (click to enlarge) 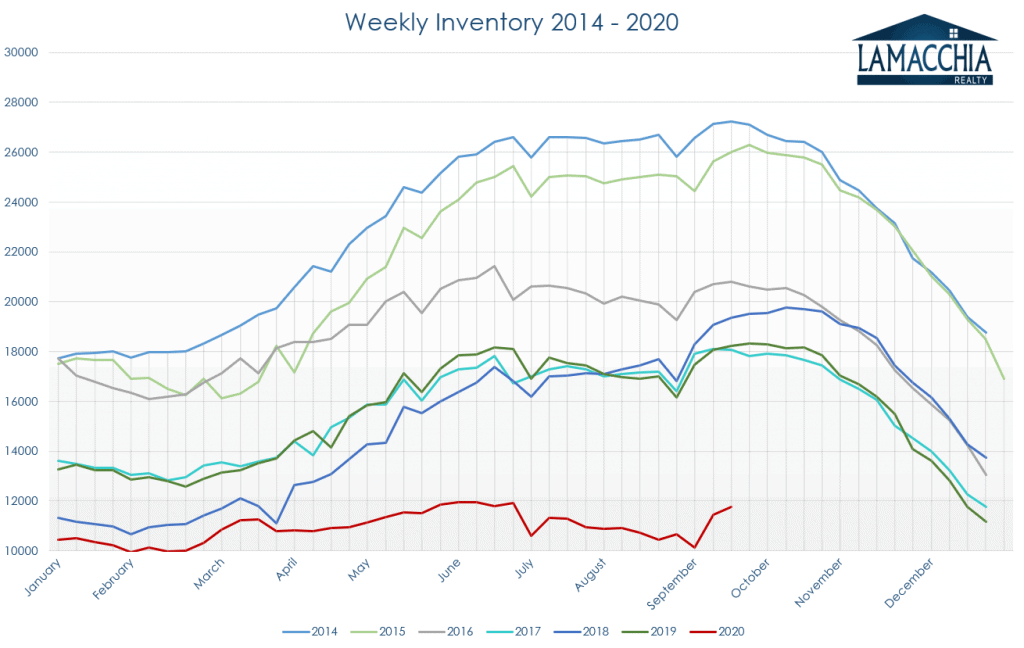 When do prices peak?

Each year home prices peak in the summer and dip in the winter.  The reason for these peaks and valleys is simply because of the seasonality related to the number of homes for sale.

Let’s start with summer – the homes that sell and close in say June and July are for sales that were negotiated and signed in the late winter and early spring when inventory is low, and demand is very high, so they sell for more.

Now let’s look at winter – the actual closed sales in January and February are mostly from sales that were negotiated and signed from September through around Thanksgiving when inventory is much higher, and demand is naturally lower.

As you can see, 2020 prices are higher than they have ever been and have increased year over year in a greater increment than ever before because inventory was historically low.  Buyers had no choice but to pay what sellers wanted and often had to outbid other buyers and offer over asking to secure the home.

This line graph below shows sale prices of homes month by month back 10 years: (click to enlarge) 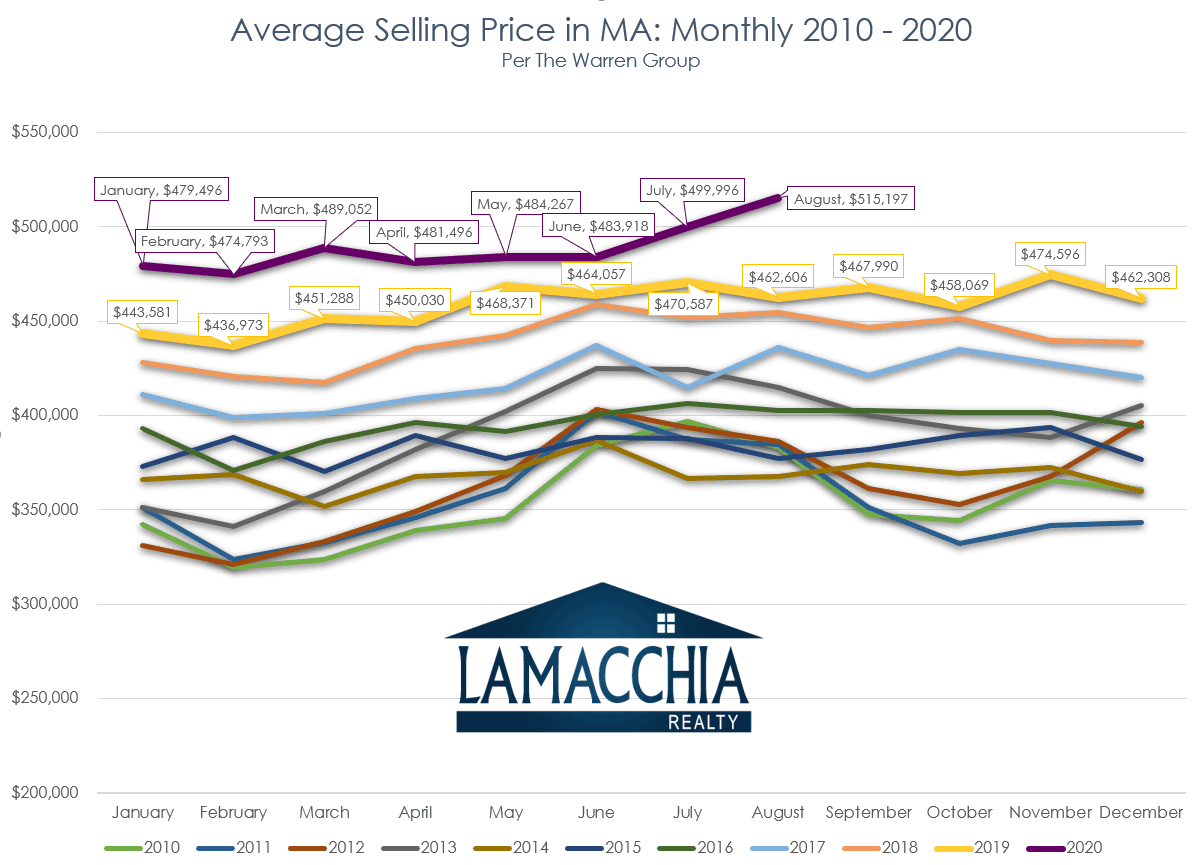 Generally, homes sold for more after the first of the year when the supply is lower and the demand is higher. The majority of these homes were relisted with the same agents and the same pictures. Goes to show it wasn’t about marketing or the agent, it was simply the timing. This timing can and should be taken advantage of by buyers.  Imagine being a buyer who hesitated in the fall by thinking “What’s wrong with it” and then paid more in the winter? The crazy part is this happens every single year.

Why is there more demand in winter and spring?

There are two reasons there is more demand in the winter and spring than in the summer and fall.

As we said at the beginning, more often than not, there is nothing wrong with THAT house that doesn’t sell immediately or have four buyers competing for it.  It is simply the market timing. As a buyer, you should use that timing to your advantage. The best thing you can do is follow Warren Buffet’s words of wisdom, “Be fearful when others are greedy and be greedy when others are fearful.”