Take a look at John on NECN News last Friday night.  They did a story on the low interest rates.  Just to clarify one thing.  The story made it sound like you need to have 20% down to buy a home.  That is NOT TRUE!  Many buyers put as little as 3.5% down. 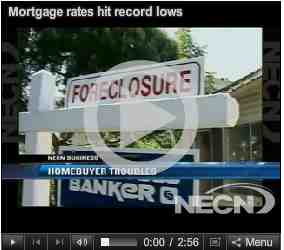 Despite record low mortgage rates the rate of homeownership has fallen and it begs the question, is part of the American dream of owning a home now unattainable?  Our business reporter Peter Howe joins us with the numbers.

Yet home purchases have gone down 12 percent from a year ago. What’s the reason?

As mortgage brokers like Debbie Siegal of Westchester Mortgage in Newton Centre are finding, all too few people are getting these rates. She says people’s expectations are that since they qualified years ago they figure it will be no problem. But home values have changed and the requirements for qualifying for loans have changed as well. Some of the hurdles preventing people from getting these low rate loans include some lenders requiring more money for down payments, credit score requirements higher than 700 and many would-be refinancers’ homes and condos have lost their equity.

But some realtors like John McGeough of Lamacchia Realty Inc. in Waltham, Mass, call the reports about refinancing and mortgages exaggerated.

“People should be gobbling up properties at a feverish pace right now, but they’re not,” says John McGeough of Lamacchia Realty in Waltham, which sells homes and condos as far out as Worcester County, southern New Hampshire, and Cape Cod.

“Right now is by far the best time to buy that we’ve ever experienced. We’re hoping that as the rates continue to stay at this rate, and some of the hype about impossible-to-get mortgages wanes, we’re going to actually see a very healthy market.”