Mortgage Rates at Highest Level Since 2011

Last week, the 30-year fixed mortgage rate climbed to the highest we’ve seen since May this year and this week it’s even higher.  These rates, which are inching to upwards of 5%, are making it more expensive for buyers to borrow thus diminishing what they can afford for a home.

The booming US economy, higher government debt issuances, and global trade tensions are attributed to the climbing rates, as stated by Freddie Mac last week but as strong as the economy may be, borrowers will have to readjust what they can afford for a home if their monthly payments are going to increase due to such high rates.  We did see rates relax in mid-April, but as any period of correction goes, it was temporary, and summer/early fall brought back the climb to a peak we haven’t seen in almost 7 years.

In the graph below, we can see that rates in the fall of last year were almost an entire point below what they are today.  They slowly rose until the beginning of February 2018, where they begin to increase at a faster pace all through mid-March until they cooled down for a brief period in April right before they spiked in May.  Rates continued on a jagged path until the end of summer and now they’re almost as high as what we saw at the end of February 2011 when they hit 5.05% for a 30-yr FRM.  On Monday, Sept 24, 2018, rates came in at 4.85% for a 30-yr FRM, 4.30% for a 15-yr FRM and 4.05% for a 5/1 ARM.  By next week it’s possible that we see a repeat of February 2011. 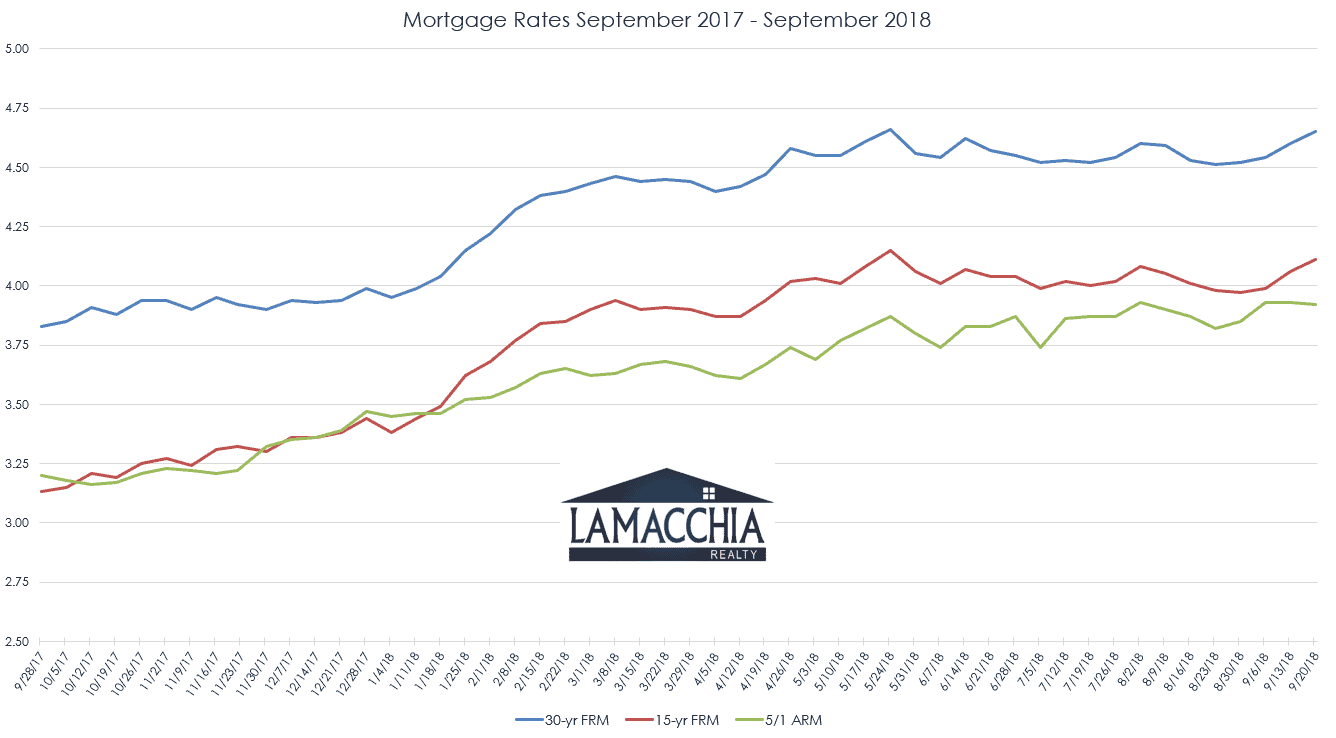 Increasing home values are another factor in buyer affordability, as we’ve seen over the past eight months.  Luckily, those increases have settled slightly with the welcome fall inventory boom but it’s temporary and early 2019 will ramp that back up again with winter’s expected lower inventory.  If the economy continues the path it’s on, rates will likely continue to increase until Spring.

These higher rates come at a bad time as the market has slowed down since summer and sellers just don’t have the power that they did months back. Anthony Lamacchia explained all of this in his op-ed on September the 11th.   No doubt it’s a great time to buy as it always is in the fall, but the higher rates do take the motivation out of some of the buyers.  However, they should think about the fact that they are on the way up so if they wait to buy in the spring, they will pay more for a home and likely pay a higher rate as well.  Paying more in the spring for homes than in the fall has been the pattern over the last few years.  Just last week Lamacchia released a blog showing several examples of homes that sold for more this past spring than they were listed for last fall.  That blog can be found here, “No…. There is nothing wrong with THAT home”.  Bottom line, if you’re interested in buying, now is still a better time than waiting until spring.

Contact us with questions or to discuss your goals with one of our expert local Realtors.