Massachusetts Home Sales Down 7% in March

According to data provided by the Warren Group, there were 4,509 home sales in Massachusetts in March, down 7% compared to March 2013, when there were 4,829 home sales. This can be attributed to a drop in sales of both single-family and multi-family homes, which were down 11% and 17% respectively.

This is the second month in a row that home sales are down and it’s due to two main factors: housing inventory levels are already low, and the bitter cold and multiple snowstorms we experienced this past winter prevented many sellers from listing their homes. This caused inventory levels to drop even lower than levels we saw in the winter of 2013, so even though there were plenty of buyers there simply were not enough homes for them to buy.

With higher demand and fewer homes for sale, home prices continue to go up across Massachusetts for all types of homes. The average price for a single-family home in Massachusetts in March was $398,035, up 12% over last year when it was $355,861.

Average home prices increased in all Massachusetts counties except for Dukes County. The largest average price increase—28%– was in Berkshire County, where the average sale price for a home was $319,072 compared to last March when it was $248,926. Essex County came in second, with an increase of 14% in average prices compared to March of 2013. 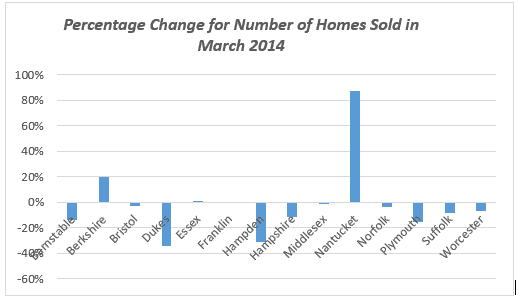 Previous article
Lamacchia Realty Named One of Boston Business Journal’s 2014 Pacesetters for the Second Year in a Row
Next article
How to Pack Your House Like a Pro
Tags: