January 16th, 2020, Framingham, MA- The first-ever Meghan A. Martin Award was announced at Lamacchia Realty’s annual kickoff event. This award was given to Realtor Leslie Storrs, whose actions embody the many things Meghan stood for and demonstrated each and every day. 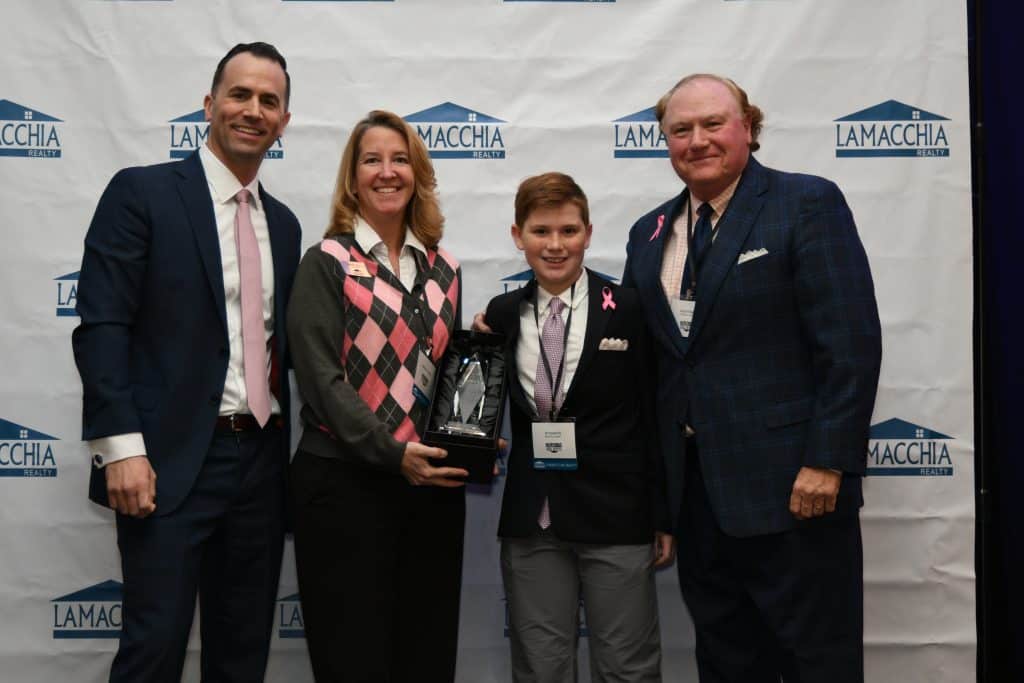 “On behalf of the entire Martin family, we would like to congratulate Leslie on this well-deserved recognition. Given the tremendous group of people in the Lamacchia community, I know it must have been a difficult choice and only speaks volumes of how impactful Leslie has been to the firm.  Meghan’s motto throughout her battle was always “One life. Live it.” She treated everyday as a precious gift from God, that she lived to the absolute fullest. Leslie gave more than a kidney with her courageous act, she gave a desperate stranger the opportunity to continue on and LIVE IT like Meghan did.”  -Patrick Martin

Anyone who knows Leslie knows how incredibly generous, kind, caring, and deserving she is of this prestigious award. Leslie joined Lamacchia Realty back in May 2019 and her warm heart and positive attitude had an immediate impact on the Leominster office and the company overall. Her kindness and compassion for others are second to none. Leslie’s generosity goes even further than to her clients, friends, and family – she even wholeheartedly extends it to complete strangers. This past Summer, Leslie donated one of her kidneys to a stranger simply because she could. For her, it was a no-brainer.  She knew she was able to give someone a better quality of life and provide something that most cannot.

“Congratulations to Leslie on receiving the Meghan Martin Award. Having the chance to really get to know her over the last seven months and having her as a major part of the Lamacchia family, I’ve seen nothing but positive energy toward our company, our agents and most importantly, her community. Donating a kidney not because she had too but because she could… that’s impressive and very much along the same values of the award namesake, Meghan Martin! Leslie embodies the type of person we strive to have within our company.” – John Millen, Manager of Business Development, REALTOR®

Leslie is never without a smile and her energy is infectious.  She is always willing to help others and is there to support fellow agents in whatever they need. Before Real Estate, Leslie was a teacher for 11 years before transitioning to this industry where she quickly became a top Realtor in North Central Massachusetts.

“Having been fortunate enough to have known Meghan for a few years and seeing the type of person she was, I am certain that she would be very happy to see Leslie receive the first-ever Meghan Martin award. Leslie embodies much of what Meghan was all about, and she sure showed it in 2019.  Not only with her positive impact on the company but giving a kidney to a stranger, which is one of the nicest gestures I’ve seen in my life.” – Anthony Lamacchia, Owner, Lamacchia Realty

Lamacchia Realty is proud to award the inaugural Meghan A. Martin award to Leslie Storrs.  To learn more about Leslie, click here.

Meghan Martin joined Lamacchia Realty in late 2017 and made a massive impression on everyone in the company, including agents, staff and the leadership team.  During her time at the company, everyone noticed Meghan’s incredibly positive attitude as she treated everyone with respect, was gracious, thankful, and giving.

Meghan was initially diagnosed with cancer in 2012 and fought it with dedication and hope, raising awareness and funds during her health journey by contributing her time and energy to the Pan-Mass Challenge and to the Dana Farber Institute.  Her attitude never faltered during her initial diagnosis, nor when cancer returned in 2014.  Meghan was always present, hopeful, dedicated, and thankful for all the goodness in her life, never letting this sickness get the best of her.

In her first year of joining the company, Meghan Martin accomplished her goal of being inducted into the President’s Club, for which she and her husband traveled to Aruba with the fellow President’s Club inductees and members of the management team – a time for which everyone on that trip is grateful for. While there, Anthony talked with Meghan and Genevieve Botelho about how they set their minds to making President’s Club and how Anthony was so proud of them.  Megan had told Anthony in the fall of 2017 that she was going to make Presidents club in 2018.  At that time Anthony told her that he was more concerned about her health and suggested maybe she focus on that and she said, “my health is fine I am going to make Presidents Club watch”.  Another thing to note about the video is Meghan did not want to talk about her cancer in the video, so they did not. While it would have made an impression, that is not what Meghan was about. She did not want any excuses or special treatment.  Meghan’s passing in August of 2019 was incredibly sad for everyone in the company, but everyone also knew that she’d rather her life be celebrated with joy.

“Meghan was an inspiration and someone you were just drawn to. She had this energy and spirit that was simply put, just Meghan.  She had this special way of making everyone she spoke to feel special as if you were the only one she was speaking to and the only thing that was important to her.  She also made sure to ask everyone how THEY were doing. How THEIR work was going. How THEIR life was.

She was extremely smart, professional, driven, and always led by example.  She wanted to be the best mom, best wife, best friend and best Realtor. Cancer unfortunately made Meghan be someone she didn’t want to be, as it sometimes made her weak and tired.  Despite that, she was determined to kick cancer in the butt and prove she could do anything – prove she could conquer the world! She wanted to make Presidents Club her first year with Lamacchia, despite everything, and of course she did! Nothing could stop her. She never used cancer as an excuse.  And that’s inspiring to many people to be more like Meghan.  To not let the lemons life gives you be an excuse.  In fact, quite the opposite: take advantage of each day and do as much as you can, because tomorrow is not guaranteed.”  – Bea Murphy, REALTOR® and Dear Friend of Meghan

“Meghan is, was, and forever will be one of the most inspirational people I have known. When we first met, we had an immediate connection and became fast friends. She told me that she was going to make the Lamacchia Realty President’s Club and we would be together in Aruba. Despite her prognosis, Meghan never stopped reaching for her goals. Her determination was one of the attributes I loved most. In under two years, Meghan did make President’s Club and it was there, on the bow of a boat, that I had a conversation with Meghan that I will remember for the rest of my life, because it changed my life. She is the bravest, kindest and most inspirational person. I am honored to have known her and to have been able to call her a friend. – Joselin Malkhasian, REALTOR®

Due to Meghan’s desire to leave such joy everywhere she went, along with her infectious energy and her impact in the company, Lamacchia Realty will honor her by renaming the Teamwork and Culture Award to the Meghan Martin Award. In 2018, John Millen received the Teamwork and Culture Award for his positive contributions to the company. This is the award that was renamed and altered slightly to be named after Megan.