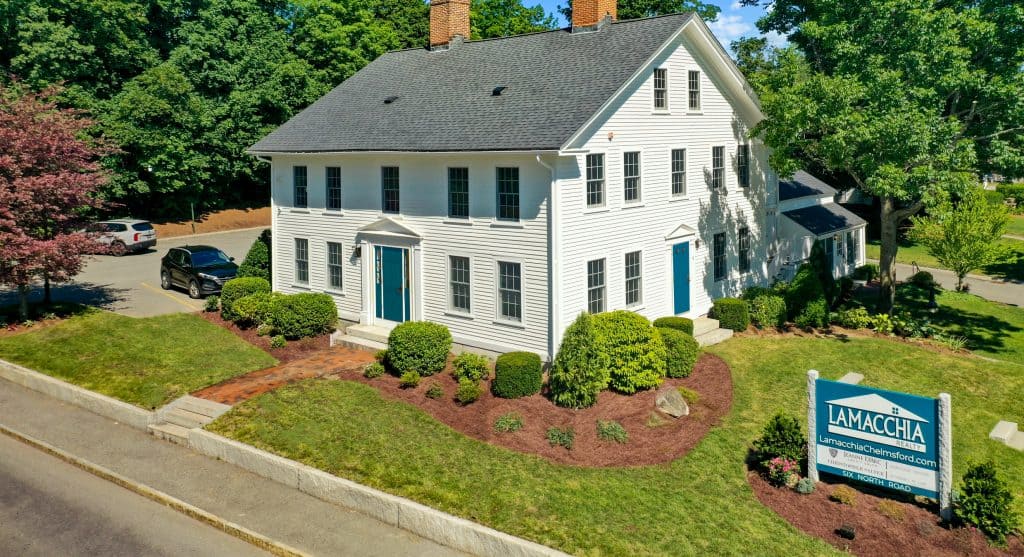 After massive renovations, 6 North Road in Chelmsford has a whole new look and is built to accommodate Lamacchia Realty’s Chelmsford agents as well as agents that were previously located in the Westford office.

Anthony Lamacchia purchased the historic building in December of 2020 after the  February 2020 acquisition of the highly reputable First Team Realty. During the renovation period, Lamacchia Chelmsford agents operated out of the Westford Office. Now that the spacious and beautiful Chelmsford Office is open, the Lamacchia Westford Office agents have moved into this regional branch location in Chelmsford.

“After 3 years of wanting to get into Chelmsford, I honestly cannot think of a better location or building for us to be opening a branch and regional office in. I feel lucky that we were able to land this location and bring on the wonderful agents of First Team Realty after acquiring the business last year. Now that our Westford Realtors have moved over to this location along with other new Realtors joining, we will become a force in this market, as we are in others! The town of Chelmsford has been very welcoming, and we are excited to be here to serve buyers and sellers from the heart of the town!” 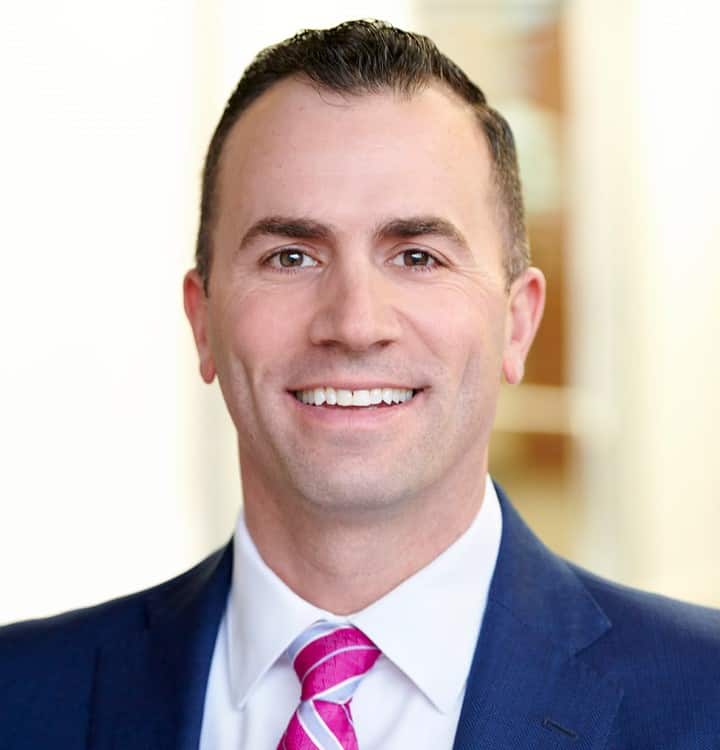 While Lamacchia has been serving clients in and around Chelmsford for decades, the brokerage is thrilled to finally be serving the Chelmsford community right from the center of town. Renovating a historic building is no easy feat, but months of construction and hard work have certainly paid off. The company wanted to stay true to the building’s historic roots and open it back up to how it was years ago. In doing this the building received a much-needed renovation including replacing or adding all new floor decks wall studs and adding many beams throughout. All mechanical systems were completely replaced, including plumbing, heating, Air conditioning, electrical, insulation and much more.  Upon entering the building, you will see no detail was overlooked and the very best finished carpentry was done.  You can see the original bones of the building in the exposed beams and stunning fireplaces combined with modern touches like the stunning client waiting area and a glorious open loft space that overlooks work spaces below.

Agents and staff alike have highly anticipated the reopening of this beautiful office. Now that there is a state-of-the-art training center to gather in, we have no doubt the office will be full of agents looking to learn the newest technologies and strategies to better serve their clients, grow their business, and better manage their time. Lamacchia Realty’s Chelmsford Office is home to over 45 highly trained and experienced Realtors plus several staff members including some from the overflowing headquarters office in Waltham.  Angela Harkins, the agent who spearheaded the opening of the Westford Office through a sale to Lamacchia in 2015 is thrilled to be making the move.

“I’m so excited that we have grown so much that we needed a larger office! The newly renovated Chelmsford office is beautiful with SO much space. The community location on North Rd is wonderful, yet we have even better highway access for our client’s convenience. I am thrilled to now be working out of the new Chelmsford office!” 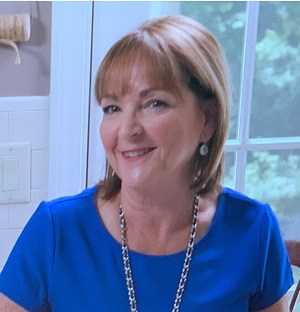 First Team Realty natives who made the move to Lamacchia during the acquisition hardly recognize the office they once knew! Paul Dubuque, Maryellen Russo, and Deborah Smith are ecstatic to see the building they’ve known for so long given a well-deserved facelift.

Previous
Next
“I cannot get over how beautiful the Chelmsford office looks now that it has been remodeled. I have worked full-time in that building since 2004 and never would have imagined that it could look so different and so spectacular. Congratulations Anthony Lamacchia, great job!” 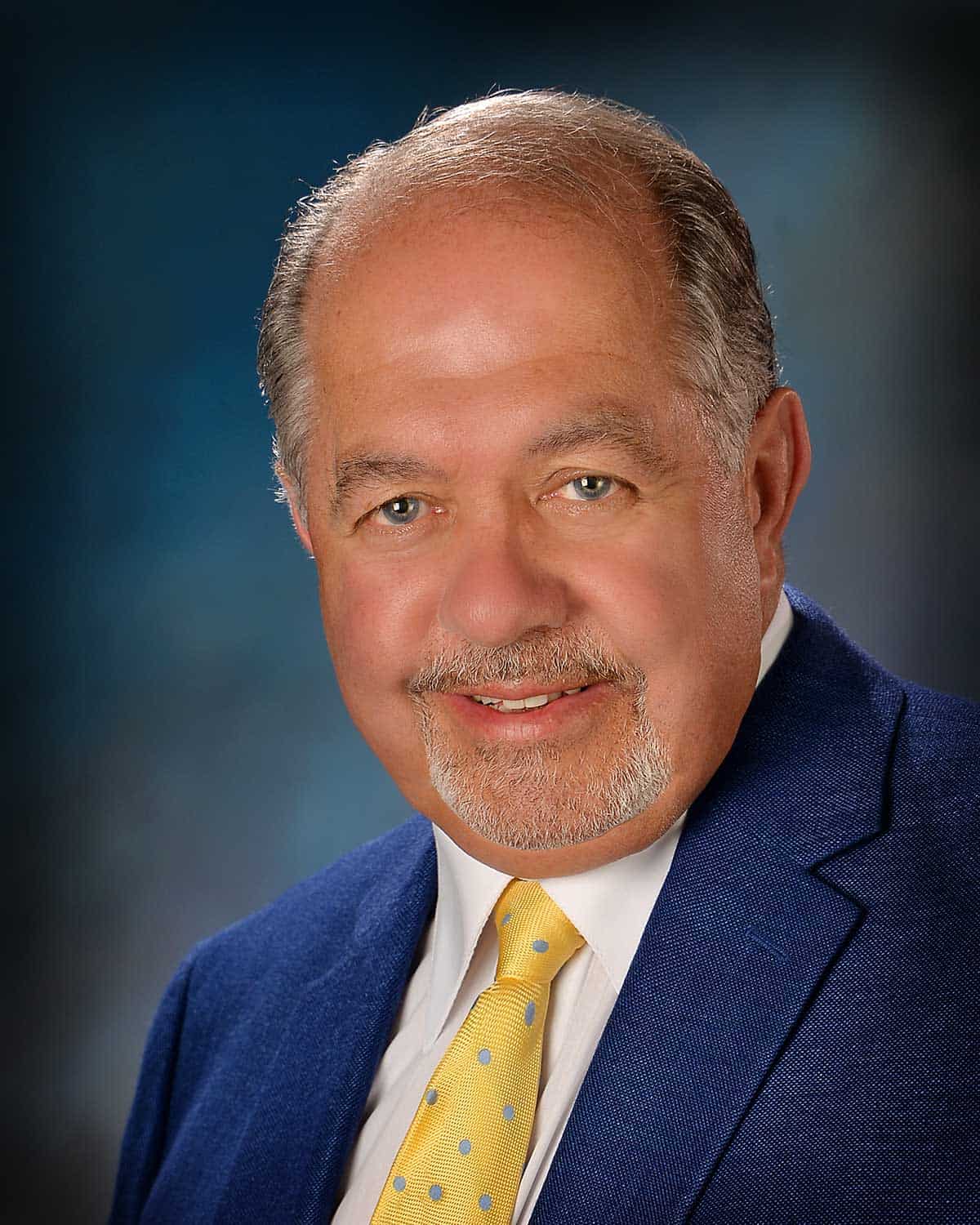 A number of talented local agents recently joined Lamacchia Realty in anticipation of this stunning office opening up in their town, including Carol McDonald Macri. Long time top producing agents within the company are also looking forward to the fresh change of scenery, including: Ashley Bergin,  Susan Mathurin, and Kate Perrine.

Recently, Lamacchia opened several new office locations starting with the purchase of the historic 451 Main Street office in Waltham and the acquisition of First Team Realty in Chelmsford.  In the summer, Lamacchia expanded into both Hudson and Beverly, officially stating their claim in markets the company has already been serving for over a decade. Finally, after years of referring clients to other companies, Lamacchia opened its very first office in the state of Florida.  The new Fort Lauderdale office expands its presence beyond the New England area, allowing the company to serve the South Florida market.

All offices have seen a major increase in the number of agents, most notably our Worcester office which is anticipated to cross the 100 agent benchmark any day! The most recent move for Lamacchia Realty has been into Maine, where they recently received their brokerage license to mark the 6th state. The company just celebrated reaching the 400 Realtor® milestone and has since welcomed more to the roster.

In 2020, Lamacchia Realty made Inc.’s 2020 List of 5,000 Fastest Growing Companies in America for the 9th time in a row. In 2021, they were ranked the 22nd Fastest Growing Company in Massachusetts from the Boston Business Journal Fast 50. Additionally, Lamacchia made the list in several categories by REAL Trends 500 on their annual list ranking of the top 500 brokerages in the U.S. and is recognized as the #1 Affiliate Nationally for Highest Growth Rate by Leading Real Estate Companies of the World® over the past 5 years. 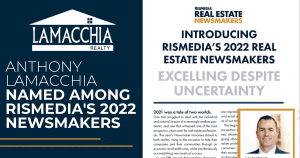 RisMedia released its list of 2022 Real Estate Newsmakers on February 1st. Anthony Lamacchia was on the list, specifically named under the Crusader category highlight! 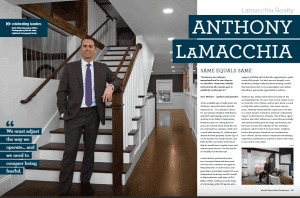 In February’s edition of Real Producer’s Magazine, Anthony Lamacchia was featured in a Celebrating Leaders article. Beginning on page 26, the spread discusses how Anthony 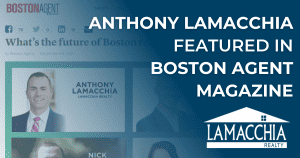 Anthony Lamacchia was recently featured in Boston Agent Magazine, where he and other local real estate leaders discussed their predictions for the market in 2022.