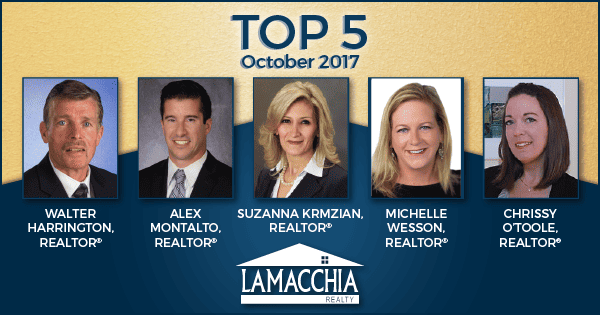 Walter Harrington has been a Realtor and a member of Lamacchia Realty since 2013.  Walter lives in Ashburnham with his wife and three daughters and grew up in Chelmsford.  With his vast knowledge of the area, he works all along the top part of the state over to the Merrimack Valley and into Southern New Hampshire.  Walters favorite part of his career is meeting new people every day and taking them on tours of so many different and interesting properties, all while helping them search for the home of their dreams.  To learn more about Walther, click here: Walter Harrington.

Alex Montalto has been a REALTOR® since 2012 and joined Lamacchia Realty in 2010 where he worked as an agent on the staff side of the company and was involved in over 800 sales over a five-year period.  Alex recently became a member of the Lamacchia Realty 2017 President’s Club.  To learn more about Alex, click here: Alex Montalto.

Suzanna Krmzian has lived and worked in Cambridge and Belmont for nearly 2 decades so she knows what it takes to buy and sell real estate in the area and make happy customers. Her office is in Waltham, MA, and she specializes in residential buying, selling and leasing throughout Massachusetts, especially Cambridge, Watertown, Belmont, Arlington, and Waltham. Suzanna helps her clients buy or sell their home, wherever they may be moving to or from, even if it’s out of the state.  To learn more about Suzanna, click here: Suzanna Krmzian.

Chrissy O’Toole works with both Buyers & Sellers in Middlesex & Northern Worcester County areas.  She grew up in Burlington, MA and now resides in South Leominster with her husband after several years in both Brighton & Clinton.  Chrissy has grown her business exponentially since joining the company in late 2013 averaging over 25 transactions per year, she also served on the company’s advisory committee.  To learn more about Chrissy, click here: Chrissy O’Toole.

Previous article
Hidden Costs of Selling a Home
Next article
You Bought a House, Now What?
Tags: