Waltham, MA – Lamacchia Realty Inc. is happy to announce that for the 6th year in a row they have been included in the Inc. 5000 list of the top 5,000 fastest growing private companies in America!  Last year, Lamacchia Realty was #4,677 on the list, but this year the company’s placement has improved by over 21%, climbing to #3,685 on the list.

On August 8th, 2017, the company was notified of its placement on this prestigious list of the fastest-growing companies in America.  Inc. 5000 takes into consideration revenue, 3-year growth percentage.  Over three years, the company has exhibited an 82% growth, a large increase from the three people who started the company in 2005.  Lamacchia Realty’s 2016 revenue reached $7.5 Million and is expected to be over $10 Million in 2017, which should land them on the list again next year.

Tens of thousands of companies have been considered over the ten years that Inc. 5000 has been ranking companies on this list, but only 4% of them have made the list 6 times, and Lamacchia Realty achieved this as of 2017.

“I’m very proud of our success over the years and must admit I’m especially excited to hear that we are among the 4% to make this list 6 years in a row.  This wouldn’t be possible without all the great Realtors and employees in our company.” – Anthony Lamacchia

It becomes more difficult to make the list each year as a company’s starting base grows, but Lamacchia Realty’s recent and continual expansion made is possible once again.  In 2016, the company opened offices in Woburn, & Worcester, as well as three satellite offices in Dedham, Hyannis and Nashua, New Hampshire.  The company’s headquarters is located in Waltham and their office in Westford opened in August of 2015. 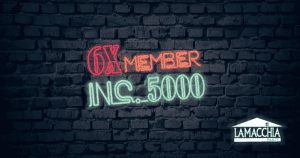 Lamacchia Realty’s client satisfaction, unparalleled sales records, and agent success is attributed to its weekly company-wide training and coaching sessions and aggressive advertising and marketing strategy.  This strategy includes but is not limited to, television, radio, and online marketing channels.

Each year, Lamacchia Realty sells homes in over 200 towns in Massachusetts, New Hampshire, and Rhode Island. Their growth will continue in 2017 and you will see them on this list again in the future.