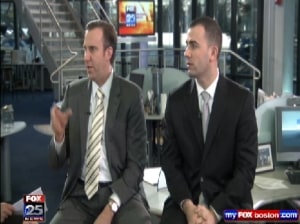 Related Blog Post: You Don’t Need 20% Down to Buy a Home

You know it’s a buyer’s market in real estate out there and yet many people are hesitant to search for a home, they’re shackled by myths that they either don’t have the cash or have enough credit to own a home, but John McGeough and Anthony Lamacchia of Lamacchia Realty say that’s not true they’re here to dispel some myths thanks for being here guys.

I think a lot of people feel this way especially if you haven’t been through the process of buying a home for the first time you think, oh there’s no way I can’t do it because it’s a lot of money, it’s a big commitment and you just think that is too much for me, but that’s not really the case.

That’s right, in 2008 when the mortgage crisis hit the news for the last two years well three years has been the banks aren’t lending, you need 20% down at least, you need an 800 credit score, and that’s not true, all those things aren’t true.

Let’s talk about the first one the fact that banks aren’t lending. There was a time for a while where it wasn’t as easy to get a loan as it was before the crisis and that still is somewhat true but that doesn’t mean that they’re not giving out loans.

No not at all I mean obviously you need to be employed, you need to have documented income, so you can’t say you’re making a hundred thousand and making fifty thousand

but you’d still be surprised at still how liberal it is to get a loan. Where you can have a credit score as low as 600. most of first time buyers are still putting down as little at 3 ½% and a 100% of that can be a gift money, so mom and dad can give you help with the down payment. So those are things a lot of folks are floored by, they still think they need, as Anthony said, these high credit scores and 20% down and that is not the case.

For a long time there was, I mean a certainly in another generation, you did have to have that 20%, it’s a lot of money to put down on a home, that changed, but now banks still want to see some money up front.

Oh that’s right and the big thing that happened is from about ’02 to ’07, banks were giving money to anyone that wanted it almost unrestricted.

If you were breathing and you could tie your shoelaces you were good to go.

And they were given crazy amounts of money, I mean $500,000 loans to people who were making $40,000 a year now they’ve tightened it up to make sure that people actually can afford the payment, can afford the mortgage, and that’s how it should be, so now things are how they should be.

What is the percentage that it should be because I know that there were people who were leveraging up to 80% of their salary or more to be in certain homes but the banks are now saying you want to be safer, to be on the safe side of things.

That’s right, I mean most banks and most numbers that you look at say you should be 30% sometimes even as high at 40% of housing expense as a percentage of your income. So we don’t really believe that it should exceed that, but still you don’t need a lot of this 20% down, you don’t need all of the criteria folks continue to think, and that’s a huge piece.

You can still buy with 0% down, USDA promotes that in rural areas like Pembroke and some other parts of the state, VA loans are 0% down, and FHA which are federally insured loans which make up the majority of first time buyers it’s 3 ½%.

And the other thing too is because the market is flush with inventory right now you don’t have to very wealthy you don’t necessarily have to be married you don’t have to have two incomes in order to purchase a home, there’s so many different options.

That’s right, but don’t get us wrong if you do have 20% to put down, wonderful, use it, you know that’s a great thing, the point we’re trying to make is, there’s been a lot of false media out there about you have to have 20%, banks aren’t lending, that’s not true, banks are lending every single day of the week, there are thousands of homes selling every week across Massachusetts so banks are lending to make those deals happen.

They want to lend. We’re shocked that buyers aren’t trying to gobble up the inventory that’s out there. Price points continue to come down, and we’re going to see more of that next year, we’ve got the lowest interest rates that we’ve ever seen on record, so it’s still a great time to buy a home and that’s the big message that we hope more and more folks start to resonate with.

If you want more information or if people want to get in contact with you where can they go?

They can always go to MLRealtyNE.com or they can call us.

Back to In The News