The Lamacchia Housing Report presents overall home sale statistics and highlights the average sale prices for single families, condominiums, and multi-family homes in Massachusetts and Southern New Hampshire for July 2017 compared to July 2016. It also looks at other metrics in Massachusetts like Homes Listed and Pending, as they are often the best indicators for predicting future trends in the market.

Massachusetts home sales increased a little over 1% in July 2017 from July 2016, keeping numbers relatively even.

Numbers in 2017 were up and down from January through April, and then they continued to remain up from May up until now, as explained in our 2017 Mid-Year Report, which is typical through the summer as people try to complete their transactions before the end of August. 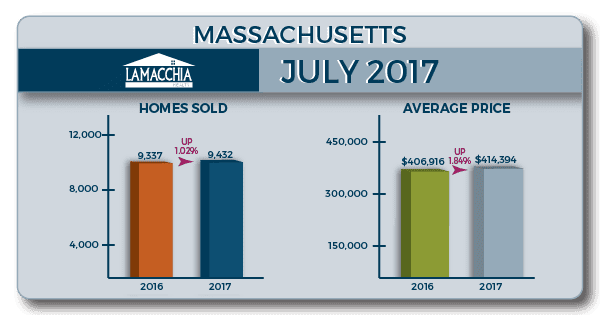 There were 9,110 homes listed for sale in Massachusetts in July 2017 compared to 9,010 in July 2016 which represents a 1.11% increase.  We predicted that due to June 2017’s decrease in listed and pending sales that sales could be down for July and August.  With only a 1% increase, the numbers didn’t drop but they remained relatively flat in July. As explained in our 2017 Mid-Year Report, homes listed were down 4.4% in Massachusetts for the first six months of 2017 compared to the same time frame in 2016, so this relatively incremental increase in July is not surprising.

There were 8,759 homes that went pending in July 2017 in MLSPIN compared to 8,816 in July 2016, which represents a very slight decrease of just over half a percent.  Although not a statistically significant change, when the number of pending homes is down, it shows that the number of sold homes could be down in the month or so to come.  There was a 3.8% decrease in the first half of 2017, as noted in our Mid-Year Report, which was feasibly caused by the tight inventory we saw this year. 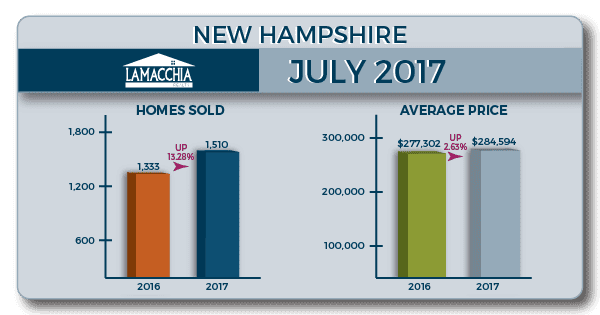 With average prices and home sales up in both Massachusetts and Southern New Hampshire, it’s clear that July was a constructive month for sellers.  Though the increase in percentages depicts a positive outcome, the number of listed and pending sales were relatively flat meaning that August could follow suit with minimal increases in numbers, if any at all.  We could be surprised, as August could have a last push in sales before September rolls around.  Summer seems a bit slower with activity possibly due to a bigger vacation season.  This should create a busy fall for sellers, so if you’re planning on listing in the next few months, make sure you’re prepared for competition.  Click here to read our blog on the best ways to prepare for selling in the fall.  You can also watch Anthony’s most recent market update video to listen to his explanation of the year’s market trends.