In The News
John and Anthony Discuss Rising Interest Rates
Previous article
Interest Rates Are Going Up: What This Means for Home Buyers and Sellers
Next article
3 Reasons Housing Inventory Has Hit Bottom 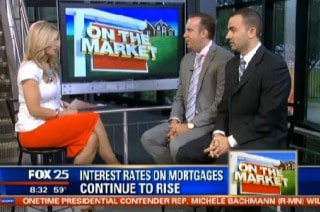 Related Blog: Interest Rates Are Going Up: What This Means for Home Buyers and Sellers

Interest rates for mortgage rates are rising, in fact they have jumped for the third consecutive week so if you’re on the market for a home listen up because it could impact you, here to help are our real estate experts John and Anthony from Lamacchia Realty

The beginning of May they were around three and a quarter, and as of last night they were 4%. So no one saw that coming three quarters of a point in three weeks is amazing.

All right so where does that come from?

Good question, you have a number of factors, I mean right now we’re seeing the stock market soar , consumer confidence is very high and usually that translates into higher interest rates so I’d say that’s the biggest driver right now and we’ll see what impact it has on the market–obviously it’s early but as Anthony said that’s quite a big jump when folks for a year have been used to sub-four and we were teetering on closer to low 3s high 2s when you’re talking about 15 year mortgages.

You mentioned consumer confidence; apparently at a 5 year high right now but people are a little skeptical about that report that’s come out, have you seen that translate into home sales?

Yes, obviously this spring the demand has been like we’ve never seen and the supply has been low so things took off so I do believe in the consumer confidence report because it translates right into housing — buying people aren’t nervous so it’s interesting so the rates going up this much is concerning, because it’s certainly not going to be helpful to real estate and the thing that I find also interesting is the fact that the Fed isn’t intentionally doing this—the stimulus that they’ve been doing month after month– $85 billion a month they’re buying in bonds to try to push rates down, they didn’t stop doing that so these are other market forces that are pushing rates up so it will be interesting to see what happens. I think they’ll probably come back down but I’m not convinced they’re going to come down as low as they were and stay there as long as they were, I think we’re getting more into a traditional market where things might go up and down.

So how does it specifically impact someone who is looking to buy a house?

Impact on say a first time buyer who’s looking to finance say $350,000, it has about a $150 a month impact, so it may not seem like a lot but we’re accustomed to, especially when you’re buying homes, monthly budgets. So if you’re approved for a certain amount and now all of a sudden you can no longer afford $350,000 and that gets put down based on that recent jump to $325,000 it could have a profound impact, and you’re also balancing renting vs buying so sometimes those numbers get tight and that’s been a huge driver for home buying because it’s been more affordable to buy so we’re cautiously optimistic, we think as Anthony said if the rates can stay at maybe around 4, get back into mid 3s we should be ok but we don’t’ feel the market is ready to support  what we saw back in 2005, 2003 where rates were at 6 or 6 and a half percent, surprisingly  were not ready for that .

Is this perhaps making some sellers nervous? That is might deter some folks?

It should make some sellers a little nervous because as an example John used the number $350,000 well if someone’s’ house has been on the market for $350,000 and they’re having trouble selling it well these rates going up is going to make it harder so sellers need to take a step back and take these interest rates into account and one thing buyers should do is they should get an updated pre-approval .If someone got pre-approved back at the beginning of May or April, and they could afford $450,000, well if that was their max their new max is without a question, lower. Because the rate is higher and that monthly payment is higher

And we don’t want to get into that mess again where people getting in over their heads.

That’s right and the other thing we don’t want is for people to take their pre-approval they got 6 weeks ago go make an offer on a home and find out two weeks later from the mortgage broker “well I told you in April your payment was going to be $2000 a month, now it’s going to be $2200,” just as an example, so people have to be real careful to get updated info.

All right so where do we see this trend going, some people say they think the market might dip again before it continues to get a little better.

It’s tough to say if rates continue to creep up and there’s going to be a slowdown in the market or at least stabilize we’ve talked about multiple offers and the markets being very hot that’ll have some impact there, I mean it’s tough to say but I think we’re still seeing healthy signs and a good balance sometimes can be helpful long term as well.

All right we’re going to leave it at that, gentlemen, John and Anthony we appreciate you being here this morning.

Previous article
Interest Rates Are Going Up: What This Means for Home Buyers and Sellers
Next article
3 Reasons Housing Inventory Has Hit Bottom