John and Anthony Discuss The Government Shutdown on Fox 25 News 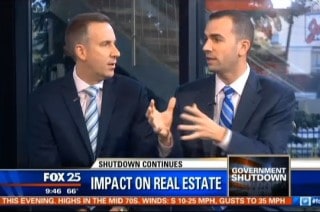 Related blog:  The Government Has Shut Down: Now What?

So here we go, the federal gridlock is entering day 6, so we’re all beginning to notice how the government shutdown is not just hitting close to home, it’s hitting our actual homes. John and Anthony of Lamacchia Realty there are some things that home sellers and potential buyers need to know right now and that’s where you guys come in. Because these are scary times.

They are. We’re surprised honestly that it’s lasted this long. We’ were a little bit oh they’ll work it out next week but this week we’re starting to get concerned about folks being able to get financing and that’s what we’ll talk about today.

I’m glad that you’re bringing that up because I don’t mean to be alarmist when I say these are scary times but when you are right in the middle of trying to buy or sell your house, and paperwork holdups are holding you up when maybe everything else is falling into place, it’s exceptionally frustrating. Tell me a little about the two most popular loans, the USDA loan and FHA loans. Are these going through?

FHA is more popular. Right now they’re going through, and FHA came out with a statement early last week saying well if it only lasts a couple of weeks we’ll be fine but if it gets extended months then we’re not going to be able to fund them. USDA is completely shut down to the point that they shut their website down at 11:59 last Monday night.

So what do people do? Do they just hang or are they just circling right now?

Let me put it this way, if you were already approved for an USDA prior to last Monday, they should be ok, they should be able to close. But if you’re one of those people who was applying, and submitted for approval and hadn’t been approved yet then you’ve got a problem, and even here in Massachusetts, inside the 495 belt, there’s not a lot of USDA loans but outside there is.

USDA is 0% down, and it’s for more rural areas. So it depends on the area it could be 3 to 5% of the overall loans but like Anthony said if you already applied, you’re ok, to some degree, we’ll talk about some of those impacts early on if you want to get one you can’t even go online.

What if you’re applying for a VA mortgage?

VA is similar to FHA they said we’re ok for now, but if it lasts more than a few weeks or a month it could be problematic. The bigger issue is –and maybe you were going to ask me, sorry, is tax transcripts.

Yes, there’s a lot of ducks you have to get in row sometimes you need those tax transcripts can you get them right now?

That is a form that is submitted to the IRS, the IRS basically looks at it, sends back the transcript to the mortgage broker and the mortgage underwriters job is to look at the taxes that the borrower gave and look at the transcript and make sure they match. Well now that division of the IRS is out of work. So there’s a few mortgage companies who said well with certain borrowers we’ll forget about that requirement, but it’s a small list. So in a few weeks it’s going to be a real problem.

One piece: the reason that form is important is because in the boom time, you would have folks kind of fudging income, now that things are tighter, there’s a verification process

Glad you brought up income, because is it still possible to get proof of income from the Social Security Administration right now?

It is, and that for certain borrowers with certain credit implications that’s another piece that could be delayed so we’re seeing that’s as another impact, there’s the tax piece, the social security verification of income, so those are the two biggest road blocks to somebody actually getting a mortgage.

And you think this could actually be helpful right? Because that now the trickledown effect is happening for homeowners and sellers, could this be the thing that really helps people cross the aisle and really get this taken care of?

We hate to comment on how people behave in Washington because even like he said it’ll be a week, well here we are at the first week now I’m saying, what if this goes for two week, what if this goes for three weeks and that’s one thing I want to point out to the viewers is communication to deal with this. I don’t want to just sit here and say how bad it is, buyers need to communicate with their agents; listing agents need to communicate with their sellers; sellers need to be asking, “hey, what type of mortgage exactly is this buyer getting, were they already approved, weren’t they,” because if there’s going to be delays, the only way everyone will get through it is to communicate properly, set proper expectations. If you find out today, if you’re a buyer, you’re supposed to close say October 30 and you find out today oh it’s going to get delayed, tell the seller today. Don’t wait until October 25.

And I’m sure it will it’s not something that can last forever but obviously if it lasts longer than this week I think it’s impossible for the real estate market not to have some delays. But as long as people communicate we’re all in the same boat we’ll get through it it’s not the end of the world

Some good advice there, Sarah over to you.