The Lamacchia Housing Report presents overall home sale statistics and highlights the average sale prices for single family homes, condominiums, and multi-family homes in Massachusetts and Southern New Hampshire for January 2017 compared to January 2016. It also looks at other metrics like Homes Listed and Pending, as they are often the best indicators for predicting future trends in the market. 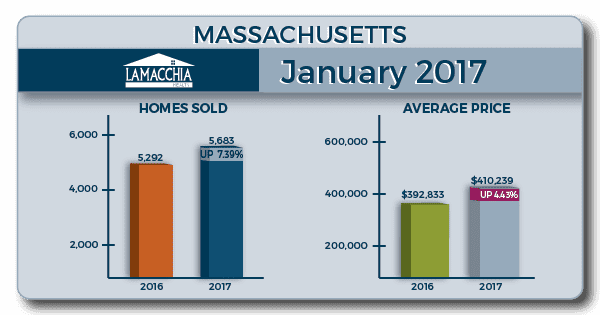 Southern New Hampshire sales, unlike Massachusetts, varied widely from category to category. Overall, home sales were up 9%, from 691 in January 2016 to 754 in January 2017. Individually, condos had the highest increase in sales, at 27%, while the number of multi-families sold fell 36% (it is important to note here that the number of multi-families sold fell from 50 to 32 — making it a small market and therefore harder to use to judge over-arching market trends). Single families landed in the middle of the other categories, with an increase in sales of just under 8%. 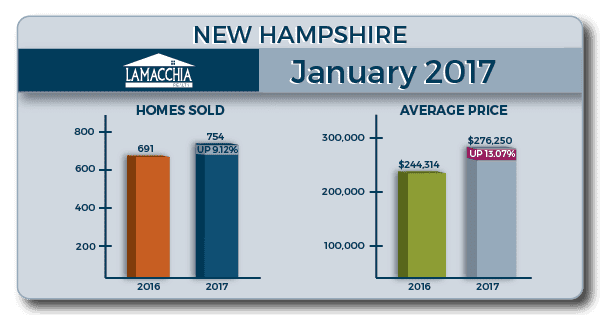 With home sales, up by 10% in 2016, it is a positive sign for 2017 to start off as strong as it did with sales being up in January.  We recently discussed how such a low inventory of homes on the market makes it a perfect time to list your home for sale, and with the activity we saw in January, it’s clear buyers are out there.  The percentage of homes listed to homes that went pending each week was up every week the entire month.  Looking forward, as long as sellers continue to put their homes on the market, sales should continue to be up.  The mild winter is assisting with this.  If it was a bad winter, inventory would be even lower.  Sellers should begin to take advantage of the active buyer market and capitalize on less competition due to the typically lower winter inventory we are currently experiencing.