Real Estate News
Interest Rates Are Their Lowest in 6 Months
Previous article
Lamacchia Realty is Now on Instagram!
Next article
Why Are Boston Rents So High?

Interest Rates Are Their Lowest in 6 Months

Last week interest rates reached their lowest point in 6 months, according to Freddie Mac’s latest Primary Mortgage Market Survey. For the week of May 8th, rates fell to an average of 4.21%, the lowest they’ve been since the week of November 7th last year when they were 4.16%.

This year, rates have fallen from their peak in January of 4.53% and been fluctuating each week since the beginning of April. The drop in rates follow Federal Reserve Chair Janet Yellen’s remarks before the Joint Economic Committee where she said low interest rates would most likely continue. Yellen said although the economy was showing signs of strengthening, even after an unusually harsh winter, there are concerns about flattening home sales as well as recent global tensions, making the Fed cautious about rate hikes. 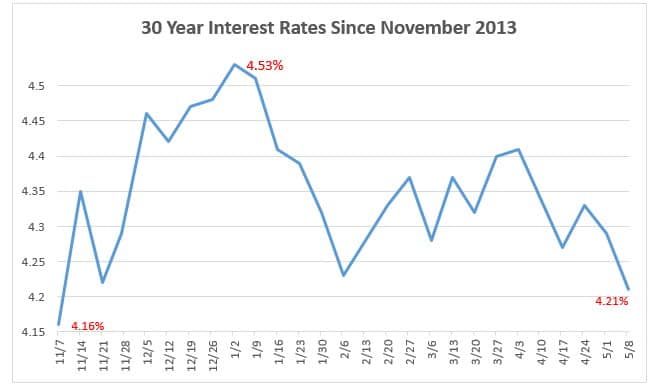 Mortgage rates for so-called jumbo loans (loans above the loan limits set by Fannie Mae and Freddie Mac) are actually lower than conforming mortgage rates. Today’s rate for a jumbo 30 year fixed is 3.99% in comparison to 4.21% for a 30 year conforming loan. 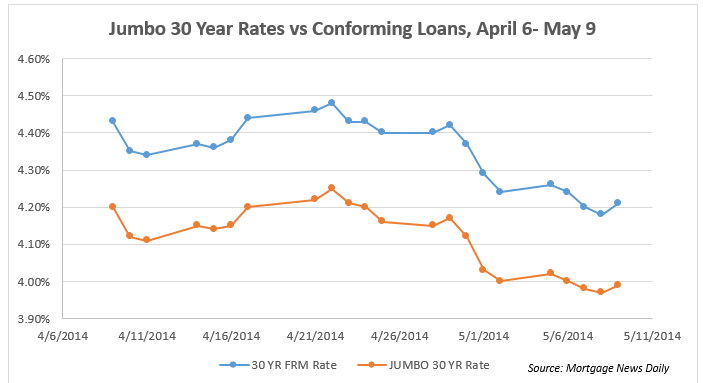 Which means home buyers who have good credit and a large down payment and who borrow a little more can get a lower interest rate. Conforming loans have become more expensive because Fannie Mae and Freddie Mac have raised their fees they charge to lenders.

Previous article
Lamacchia Realty is Now on Instagram!
Next article
Why Are Boston Rents So High?
Tags: