Advice for Homeowners Home Sales Real Estate News Selling a Home in Massachusetts
Housing Inventory at an 11-Year Low
Previous article
Why Buying a House in the Winter is a Smart Move
Next article
December Home Sales in Massachusetts Up 10%, Prices up 3%

Housing Inventory at an 11-Year Low

Current housing inventory levels are at their lowest levels since 2004 for the month of January.  As of today, there are just 17,768 homes on the market in Massachusetts, a decrease of 2% compared to the same period last year when there were 17,945 homes on the market. This is actually a welcome surprise for the market from the fall when inventory swelled to its highest level in a couple of years with over 27,000 homes for sale.  Buyer activity was slow in the late summer and into the fall which increased inventory.  The fall market disappointed a lot of sellers and Realtors.  But many sellers who were unable to sell took their homes off the market prior to the holidays. In addition to that December was a busy month with a lot of buyer activity and pending home sales (contracts accepted) in December were up over 10% compared to December 2013.  January buyer activity has also been very strong so far: as of January 14th, pending home sales were up 16%. 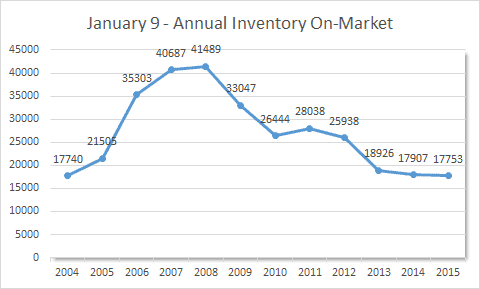 The low housing inventory is actually good news for homeowners thinking of putting their homes on the market now rather than waiting until the spring.

Why is this good news for home sellers? Fewer homes on the market mean less competition for your home and more attention from buyers. And buyers in the winter months tend to be more motivated since they are either relocating, downsizing, or simply don’t want to compete with the larger number of spring home buyers so they’ve decided to search for a home now.

What if You’re a Buyer?

There is nothing a buyer can do to create more inventory.  But they can hire a good Buyers Agent who will really help them keep an eye out for when something comes on the market and may even have access to some home before they are listed.

A good buyer’s agent will also advise a buyer on how to deal with a bidding war.  Some tips on how to do that (such as having an updated pre-approval letter in-hand) can be found by reading our article on winning a bidding war.

What’s the Housing Inventory in Your Town?

Low housing inventory is affecting towns all across Massachusetts, not just within the Metro Boston area. We’ve compiled sample data from 2005 to 2015 to show you how much inventory numbers have dropped in the past 10 years for these towns in Massachusetts. To get the individual chart and see what’s going on in your town, click below:

By the spring, more homeowners will put their homes on the market, raising inventory levels. Inventory levels usually begin to increase by the spring months, and don’t return to low levels until the following winter. For these reasons, home sellers should take advantage of the current market conditions now and list their home before the spring.

Previous article
Why Buying a House in the Winter is a Smart Move
Next article
December Home Sales in Massachusetts Up 10%, Prices up 3%