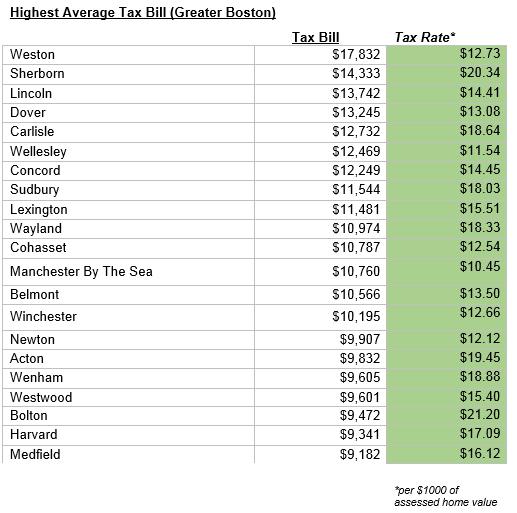 As you can see from this map below, many areas surrounding Boston have tax bills above $7,000 a year. 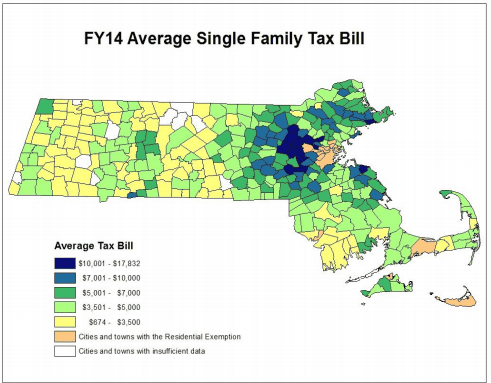 Towns in the Cape and the Islands have high property values yet very low tax rates and thus have relatively low tax bills. This is because many of these properties are vacation properties so they don’t require taxes to pay for services and amenities off-season. 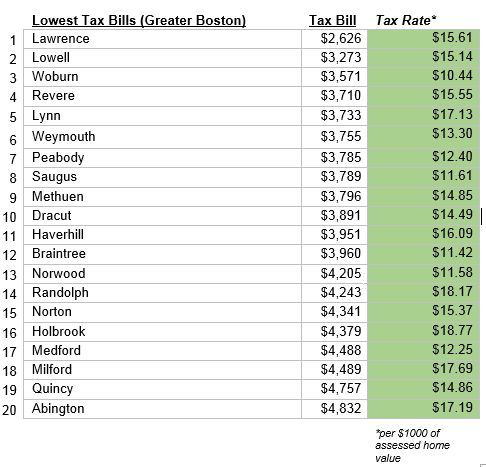 Thirteen cities and towns on this list don’t show average tax bill numbers because they have adopted a residential exemption, and detailed data used to determine their average tax bills is unavailable. They are: Barnstable, Boston, Brookline, Cambridge, Chelsea, Everett, Malden, Nantucket, Somerset, Somerville, Tisbury, Waltham and Watertown. The tax rates for these towns, however, are listed at the end of this article.

The residential exemption is a dollar value that is exempt for taxation on a principal residence that you own. This exemption reduces the taxable valuation of a taxpayer’s principal residence. For instance, in Waltham, the residential exemption reduces the assessed value of a primary residence by $78,317. So a home in Waltham assessed at $450,000 would be taxed at the reduced valuation of $371,683.

Tax rates for all towns and cities in Massachusetts for 2014*

Click Here to go back to the top of the page.

City & Town, a Publication of the Massachusetts Department of Revenue, March 2014;

Click Here to go back to the top of the page.

Previous article
Pleasant Street Corridor in Watertown is Booming
Next article
Lamacchia Realty Named One of Boston Business Journal’s 2014 Pacesetters for the Second Year in a Row
Tags: