Ashland is a residential town located in Middlesex County near Framingham.  It’s a 45 minute drive to Boston and about an hour’s drive to Providence, Rhode Island. Ashland has a stop on the Framingham/Worcester commuter rail and is also close to the Mass Pike, route 9 and interstate 495. 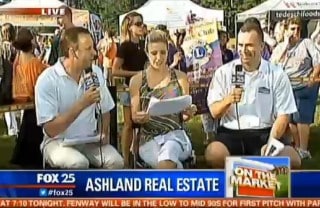 What Makes Ashland a Great Town to Live In?

See pictures of the Zip Trip to Ashland on our Facebook Page.

Ashland is home to several large parks including Stone Park, where we will be for the Fox 25 Morning News Zip Trip, broadcast live on July 19th. Residents also enjoy going to Ashland State Park, a 470-acre park, with a public beach, a boat ramp, fishing spots, picnic areas, and hiking and biking trails.

Hopkinton State Park has areas located in both Ashland and Hopkinton, and is one of the most popular park destinations in Massachusetts. Hopkinton State Park has over 1,500 acres of natural forest and open fields, along with a spring fed lake, 3 islands, 2 life guarded swimming beaches, stocked fishing, picnic areas with charcoal cooking grills, 10 miles of marked trails, and boat launching ramp.

There are several dining options in Ashland. One popular spot in Ashland is Stone’s Public House, built in 1834, which serves American fare and a variety of craft beers. The Oregon Club, built in 1922 as a rooming house, offers casual dining and traditional dishes like seafood and steak.

Do you live in Ashland?

Tell us what you like most about Ashland or send us your photos!