The Lamacchia Housing Report presents overall home sale statistics and highlights the average sale prices for single family homes, condominiums, and multi-family homes in Massachusetts and Southern New Hampshire for December 2016 compared to December 2015. It also looks at other metrics like Homes Listed and Pending, as these are often great indicators of future trends in the market.

December 2015 and December 2016 ended up being quite close in numbers, despite the robust two-digit growth we saw in November. December showed home sales only up 1.5% year-to-year overall.

The change was moderate when broken down into the housing categories, as well, with no category seeing more than a 3% change. Single families had the biggest increase (and biggest change) in home sales, rising from 4,913 sales in December 2015 to 5,035 in December 2016, a 3% increase. Multi-family homes was the only category in which home sales fell in MA, from 757 to 740, a decrease of 2%.

Individually, multi-families stood out as the category with the largest change in price: they jumped 11% in price – a full $40,000 – from December 2015 to December 2016. Single families and condos were both in the 3% range for growth, with single families just a bit higher at almost 4%. 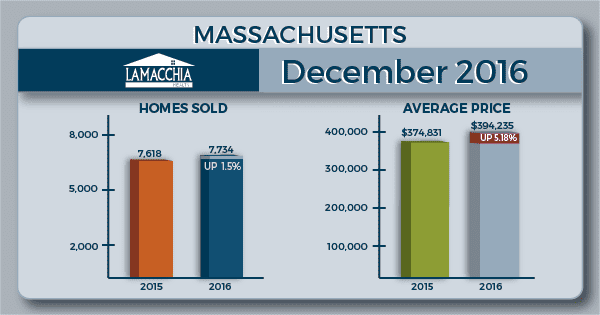 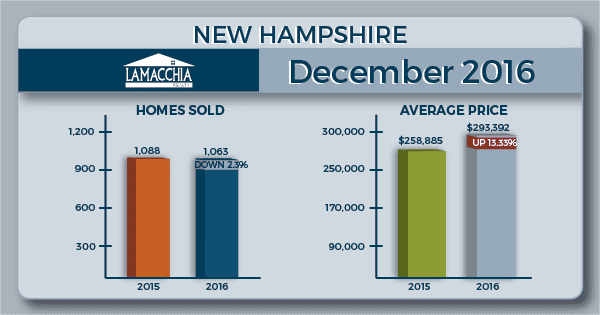 The year finished strong! December marked the 10th month of the year that home sales were up! However, with pending sales being down in December it is highly likely that January home sales will be down compared to January of 2016. The good news is we doubt that will keep up since the buyers have been out in force since the first of the year and pending sales are back up. Anyone looking to sell their home should strongly consider listing it in the winter to beat the competition and sell for more money.