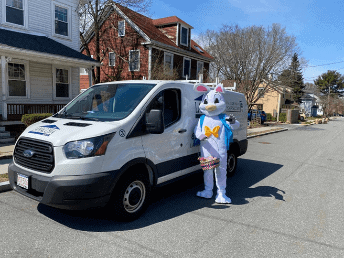 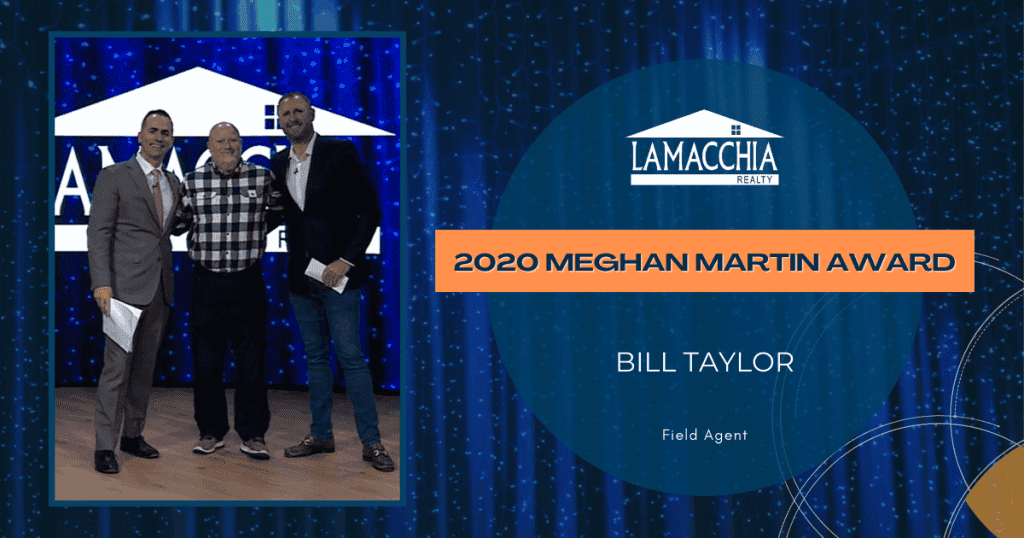 On Wednesday, January 13th, the second annual recipient of the Meghan M. Martin Award was announced at Lamacchia Realty’s annual kickoff event. This award was given to field agent Bill Taylor, whose actions embody the many things Meghan stood for and demonstrated each and every day.

Bill never fails to brighten an agent or staff member’s day with his witty humor and kind heart. He goes above and beyond to support our clients and agents and it has not gone unnoticed. Bill has been found doing everything from sweeping rocks and debris from a Veteran’s driveway for a client, crouching down to get that perfect listing angle in a photo, or even showing up on Easter dressed as the Easter Bunny in the middle of a pandemic. That’s right, Bill came up with the idea to dress up as the Easter Bunny and surprise the children of company employees all on his own. In what was a dark and lonely time, Bill volunteered to spread kindness and joy in whatever way he could. He drove up and down the state, dropping off goodies and smiles to the homes of kids desperate for a little normalcy. His kindness, dedication, and generosity truly have no bounds.

“What Bill did on Easter Sunday this year was such a nice gesture and what impressed me so much was that it was his idea, and he was determined to do it simply to make various staff members and agent’s children happy because he knew Easter wouldn’t be what it normally was.  He even argued with me and insisted on not being paid for this 12-hour day. Bill is a person with a big heart, and I see similarities in some of his actions with the way Meghan was and that is why we decided to give him this award for 2020. I’m confident Meghan is looking down in agreement with us presenting this award to Bill.”  – Anthony Lamacchia, Owner, Lamacchia Realty

“I had the pleasure of knowing Meghan, I know she would agree how deserving Bill is to receive this award.  Bill goes out of his way to help people and truly has the biggest heart. I know Meghan was smiling down when she saw all the happy children’s faces when the Easter Bunny showed up with candy for them.” – Angela Walker, Vice President of Operations

Bill comes from a diverse professional background, having worked as a corrections officer for over 20 years and then receiving his Real Estate License. After stepping away for a while, Bill returned to the industry as a Field Agent. Bill loves assisting both clients and agents in their home buying and selling process. Clients are filled with joy to see Bill’s stunning photos of the home they loved so much. Agents are thrilled to pull up to a listing and see a tall and gleaming For Sale sign on the front lawn of their new listing.

Meghan Martin joined Lamacchia Realty in late 2017 and made a massive impression on everyone in the company, including agents, staff, and the leadership team.  During her brief time at the company, everyone noticed Meghan’s incredibly positive attitude as she treated everyone with respect, was gracious, thankful, and giving.

Meghan was initially diagnosed with cancer in 2012 and fought it with dedication and hope, raising awareness and funds during her health journey by contributing her time and energy to the Pan-Mass Challenge and to the Dana Farber Institute.  Her attitude never faltered during her initial diagnosis, nor when the cancer returned in 2014.  Meghan was always present, hopeful, dedicated, and thankful for all the goodness in her life, never letting this sickness get the best of her.

In her first year of joining the company, Meghan Martin accomplished her goal of being inducted into the President’s Club, for which she and her husband traveled to Aruba with the fellow President’s Club inductees and members of the management team – a time for which everyone on that trip is grateful for. While there, Anthony talked with Meghan and Genevieve Botelho about how they set their minds to making President’s Club and how Anthony was so proud of them.  One thing to note is Meghan did not want to talk about her cancer in the video, so they did not. While it would have made an impression, that is not what Meghan was about. She did not want any excuses or special treatment.  Meghan’s passing in August of 2019 was incredibly sad for everyone in the company, but everyone also knew that she’d rather her life be celebrated with joy.

“Meghan was an inspiration and someone you were just drawn to. She had this energy and spirit that was simply put, just Meghan.  She had this special way of making everyone she spoke to feel special, as if you were the only one she was speaking to and the only thing that was important to her.  She also made sure to ask everyone how THEY were doing. How THEIR work was going. How THEIR life was.

She was extremely smart, professional, driven, and always led by example.  She wanted to be the best mom, best wife, best friend and best Realtor. Cancer unfortunately made Meghan be someone she didn’t want to be, as it sometimes made her weak and tired.  Despite that, she was determined to kick cancer in the butt and prove she could do anything – prove she could conquer the world! She wanted to make Presidents Club her first year with Lamacchia, despite everything, and of course she did! Nothing could stop her. She never used cancer as an excuse.  And that’s inspiring to many people to be more like Meghan.  To not let the lemons life gives you be an excuse.  In fact, quite the opposite: take advantage of each day and do as much as you can, because tomorrow is not guaranteed.”  – Bea Murphy, REALTOR® and Dear Friend of Meghan

“Meghan is, was, and forever will be one of the most inspirational people I have known. When we first met, we had an immediate connection and became fast friends. She told me that she was going to make the Lamacchia Realty President’s Club and we would be together in Aruba. Despite her prognosis, Meghan never stopped reaching for her goals. Her determination was one of the attributes I loved most. In under two years, Meghan did make President’s Club and it was there, on the bow of a boat, that I had a conversation with Meghan that I will remember for the rest of my life, because it changed my life. She is the bravest, kindest and most inspirational person. I am honored to have known her and to have been able to call her a friend. – Joselin Malkhasian, REALTOR®