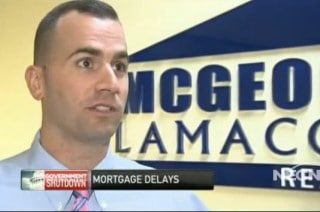 Related blog: The Government Has Shut Down: Now What?

If you’re planning to close on the purchase or sale of a home later this month or next, consider yourself warned: The partial federal government shutdown could throw a giant wrench into your plans.

“If the government stays shut down for a week, a week and a half, two weeks, I see that the closings that are supposed to take place at the end of October could definitely be adversely affected by the government shutdown,” Debbie Siegel, a mortgage broker with Westchester Mortgage in Newton, said in an interview Wednesday.

The biggest problem she sees: No one working at the Internal Revenue Service to take care of a now-critical piece of paper call Form 4506-T. It’s an income-verification form required after the housing bubble collapse in 2008 revealed the widespread prevalence of inflated “liars’ loans” based on bogus, unverified statements of how much mortgage seekers earned.

It’s a form required “when you apply for any type of mortgage, whether it’s a purchase or a refinancing,” Siegel said, and “they’re doublechecking things, ever since 2008 and all the mortgage fraud that happened and all the foreclosures, they doublecheck two to three different ways, and this is one way they doublecheck to make sure that the income and tax returns are not fraudulent.”

In effect, no Form 4506, no mortgage – but that’s only one of many ways the government shutdown’s threatening to begin shutting down the housing market:

– The U.S. Agriculture Department, which writes mortgages in more rural areas of the country, including a surprisingly broad swatch of New England and many communities between Interstate 495 and Boston, isn’t taking any more applications during the shutdown.
– The Federal Housing Administration’s rapidly getting backlogged on the 20 percent of loans it processes directly rather than outsourcing the lending decisions to banks.
– The Social Security Administration’s not answering requests for “proof of income” letters required for many loans.

“We did hear from a couple of sellers that were concerned – ‘Oh, no! What happens?'” said Anthony Lamacchia of Lamacchia Realty in Waltham.

His advice: If you’re buying or selling a home anytime in the next several weeks, plan now for a worst-case scenario.

“If you think you’re going to need an extension to your mortgage contingency, or if you think you’re not going to close on time — warn people ahead of time. Don’t wait until the day before the closing,” LaMacchia said. “If this lasts two, three, four weeks, you are going to see homes not selling, closings getting delayed, angry buyers, angry sellers.”