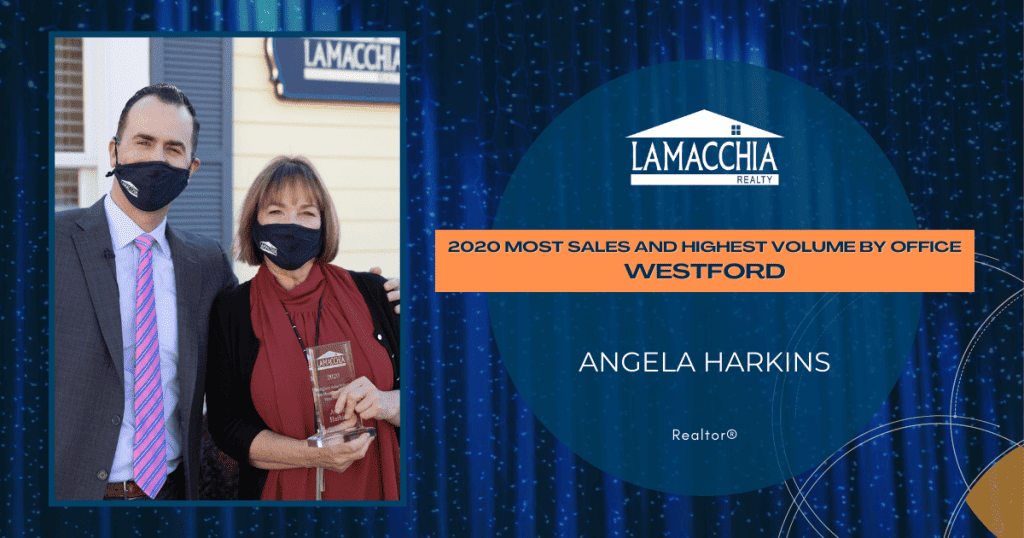 Lamacchia Realty announced today at its 2021 Kick-Off Event that Angela Harkins is the winner for Most Sales and Highest Sales Volume in the Westford office for 2020!

With 52 transactions closed and over $21,742,000 in sales volume, it is no wonder that Angela is the top agent in the Westford office for the third year in a row. Her success in 2020 has led her to qualify for the Lamacchia Realty President’s Club for her fourth year in a row. This year she even reached the distinction of President’s Club ELITE! Angela is a consistent top agent in the Westford area and is regularly in the office’s top 3 agents for the month. Angela is not only a leader when it comes to sales and transactions, but she is also a leader amongst other agents. She can often be found helping fellow Lamacchia agents, happily lending her industry wisdom to those that have just joined. She is a wealth of knowledge and her fellow Lamacchia Agents are happy to have her.

“Angela has done it again! She had an outstanding year – serving clients, growing her business, and managing to have a life for herself. She joined our company six years ago laser-focused on growing her business and getting her schedule under control and she has done both. She’s not only a leader in the Westford office, but companywide.” – Anthony Lamacchia, Broker/Owner Lamacchia Realty

Angela joined the company back in 2015 when she made the choice to join Anthony in order to grow her business and while also helping to grow the Lamacchia brand in the Westford and New Hampshire markets. In Angela’s first year of joining the company, she grew her business by 125%- nearly doubling it since then.

“Angela has been the top Westford office agent for 3 years in a row and it’s not hard to understand why. Having been represented by Angela on the purchase of my own home, I know how much she cares about her clients. Angela is a true professional and client satisfaction is a top priority for her. She is a true asset to the company, and I know she will continue to have a very successful career.” – Jackie Louh, Vice President of Business Development

Over the course of her highly successful real estate career, Angela has received a number of awards from the Realtor Association both state and local, including Realtor of the Year, Distinguished Service Award, Educator of the Year, and most recently the True Professional Award. She has also served as President of the Northeast Association of Realtors.

Previous article
Genevieve Botelho Named #1 Agent in the Worcester Office for Total Sales and Highest Sales Volume
Next article
Eileen Doherty named as the Winner of the 2020 Most Sales Volume & Most Transactions in Woburn and Companywide
Tags: