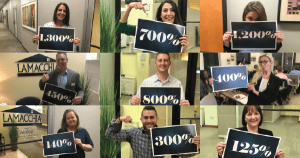 Today, Lamacchia Realty announced the average rate of growth for realtors in their first twelve months at the company.  Lamacchia’s proven model for realtor success is unstoppable and has been repeated by many realtors. A company that started out as a team model many years ago and transformed into a brokerage model in 2014 is proving to be the best brokerage around for realtors who are serious about growing their businesses in a systematic and repeatable fashion.

“I am beyond proud of our Realtors who have come into our company and taken advantage of all of the products, services, and tools we offer. They have opened their minds to new ideas and techniques and have worked so hard.  That’s why they have experienced the growth they have.” said Anthony Lamacchia

Agents who have joined Lamacchia over the past four years who were previously at another company for at least 12 months were measured on a case by case basis and averaged together.  With that formula, the average rate of agent business growth in the first year at Lamacchia Realty is up to 318%.  Individually, agents have grown their businesses by 100%, some have grown their businesses by well over 500%, and some over 1000%!  Interestingly enough, those agents who’s first year grew by closer to 100% ended up having huge increases in their business in their second year.*

The agents included in the video were Deanna Faucher, Katherine Kesaris, Genevieve Botelho, Kip LeBaron, AJ Bruce, Amie Balchunas, Michelle Wesson, Mark Visco, and Angela Harkins.  Watch the video below to hear what they have to say about being here at Lamacchia Realty and their ever-improving businesses.

Calculate how many sales you would have as a Lamacchia Agent!

*Home Sales are calculated based on the 318% average growth of our previous agents. Results May Vary

Lamacchia Realty realtors provide exceptional service while implementing the innovative strategies they learn from the company’s REAL training program.  Lamacchia Realty’s mission is to provide industry-leading training, support, systems, and technology to its agents and employees so they can reach their fullest potential.

In 2017, Lamacchia Realty also made Inc.’s 2017 List of 5,000 Fastest Growing Companies in America for the 6th time in a row, and was named Honoree in the 2017 Inc. Magazine’s Best Workplaces Contest.  In 2018, Lamacchia received recognition from the Boston Business Journal Fast 50 as one of the fastest growing private companies in America, by REAL Trends on their list of Largest Privately Owned Independent Companies in the U.S., and received the Leading Real Estate Companies of the World Fast Tracker Award.

*This study measured over 33 agents, which includes the agents listed who appeared in the video along with other agents who preferred to remain anonymous.  Although most agents experienced significant growth, there were some that didn’t. However, all of them were factored in to obtain this average.