A Look at 5 Popular Boston Area Commuter Towns for 2017

Commuting to work in Boston is time consuming and difficult for so many people. Trying to find that perfect match of a town that fits your family’s needs but is also easily accessible to work is what makes it so hard. If you are planning on moving and are experiencing some of these similar struggles, then this is the blog for you. We have put together 5 of the better commuter towns in the Boston area.

We are taking into consideration the town’s school system, affordability, access to the city, safety, available activities and more.

has started to become more and more popular within the recent years. Based on its surrounding towns such as Newton, Lexington and Weston, Waltham is the more affordable option.   The average commute time on the commuter rail is 22 minutes and about 30 minutes driving depending on traffic.  The median home value is $513,600 with the Zillow HS School Ranking 6 out of 10.

Woburn actually has the most amenities per capita than most other Boston suburbs. It also has an extremely quick commute time and if you want to enjoy the outdoors, check out Horn Pond for kayaking, fishing and much more. The commute time runs about 23 minutes on the commuter rail and about 30 minutes driving with low traffic congestion.   The median home value is $423,100 and the Zillow HS School Ranking is 5 out of 10.

Belmont has made our list because of its great school systems, close proximity to Boston and family friendly atmosphere. Be aware that it is one of the more expensive towns on our list. It may not be the best option for people that have a tighter budget.   The commute time from Belmont is 15 minutes on the commuter rail and about 30 minutes by car on average depending on traffic.  It has a higher median home value of $849,450 but has a Zillow HS School Ranking of 9 out of 10. 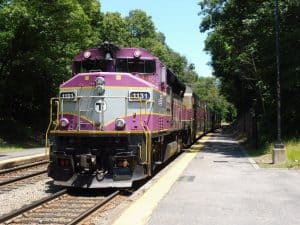 Dedham is west of Boston, located on route 128 and route 1 which both provide easy access to Boston.  Dedham has a highly developed commercial space and nightlife activities while also being a great place to raise a family.  There are seven public schools and various private school options for Dedham.  It takes about 30 minutes to commute to Boston on the commuter rail and about 30 minutes to drive there depending on the level of traffic.  The Zillow HS School Ranking is 6 out of 10.

Melrose is considered up-and-coming but it has been a family friendly area for a long time.  It’s located right off 93 which is a straight shot into the city, and it also has the Commuter Rail and the Orange Line at Oak Grove (on the Malden town line) for those trying to avoid the traffic. It typically takes about 20 minutes to get to and from Boston.  Melrose has recently experienced a boom in condo and apartment development and also offers charming homes for families, giving prospective buyers a variety of real estate choices.  The median home value in Melrose is $539,700 with a Zillow HS School Ranking of 7 out of 10.