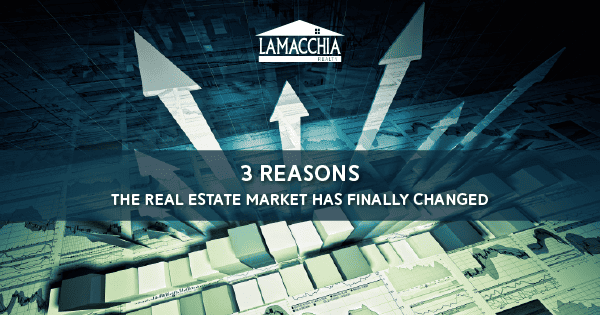 Back in July, the Real Estate News Articles started coming out like they always do every summer stating that the real estate market had really changed.  At first, I didn’t believe it was a real change because what tends to happen every summer is the number of homes for sale increases and the market slows down slightly.  This is often due to unrealistic home sellers who list in late May, June, and July who expect their homes to sell as quickly as their neighbors did just months prior in winter and early spring.  They don’t understand why it takes much longer for them.  This happens every year after a crazy-busy spring with low inventory and multiple offers flying everywhere which increases the sale prices.  We released a spring blog called Don’t worry Buyers…. Nothing Lasts Forever in an effort to cool buyers fears who worry that low inventory and high competition is something that will haunt them all year long.

The first article was in the Wall Street Journal by Laura Kusisto- “Home Sales Extend Slump Despite Economic Strength” followed by several others in a variety of news channels.  At first, I assumed it was the typical summer story recirculating to grab headlines, and I expressed this quite forcefully in a Market Update video I did on July 30th.  In beginning of August, I called a few broker friends on the West Coast to ask them what their market was like and most were saying it had slowed down.  One thing I learned years ago was that whatever the market is doing out West, the East Coast will inherit within a few months- so their slowed market put my antennas up. Then around August 10th, despite our company performance and the overall market seeming to stay busy, I noticed the first big sign of deceleration which was a higher inventory than the same time a year ago. I further explain this below.

The Three Signs of Change:

1. Inventory is higher than a year ago

Since 2014, at any moment, inventory of homes for sale here in Massachusetts and most of the country have been lower than at the same moment the year before. We monitor several housing statistics and metrics on a weekly basis, but this is the one that I personally watch the closest.  The MLS “On Market Snapshot” is my personal favorite.  Right around the first week in August I noticed inventory spiked a bit more than usual and I ran the report.  Once I saw that it was higher than the year before, I began to believe that maybe, just maybe, we were FINALLY going to snap out of this never-ending downward spiral of lower inventory we have been stuck in for six years.  This is terrific news for buyers who have been extremely frustrated but especially after this past winter and springs excessively low inventory.

This graph below shows the weekly inventory of homes for sale back to 2012.  It very clearly illustrates how inventory has not only lowered year after year since 2012 but also how it has been lower at almost every given moment up until this past August when we finally broke out of the grip of it. 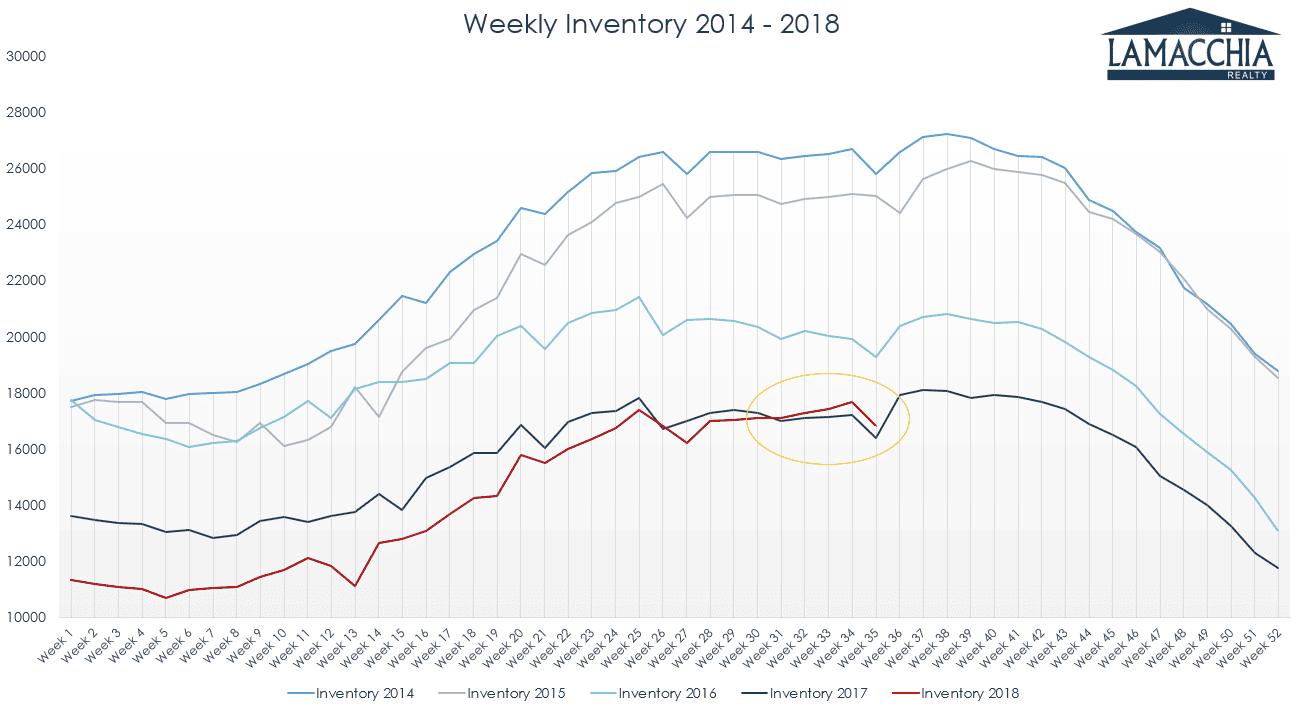 2. Price adjustments are up

By the end of August, as inventory continued to be higher than the year before, I began paying even closer attention to the number of homes with downward price adjustments. Price adjustments on listings are always more plentiful in the summer months than in the winter and spring simply due to a higher supply and lower demand.  And as I mentioned earlier, homes that get listed in the summer months also have a higher tendency to be overpriced in the beginning and then adjusted accordingly when buyers aren’t interested enough to make an offer. 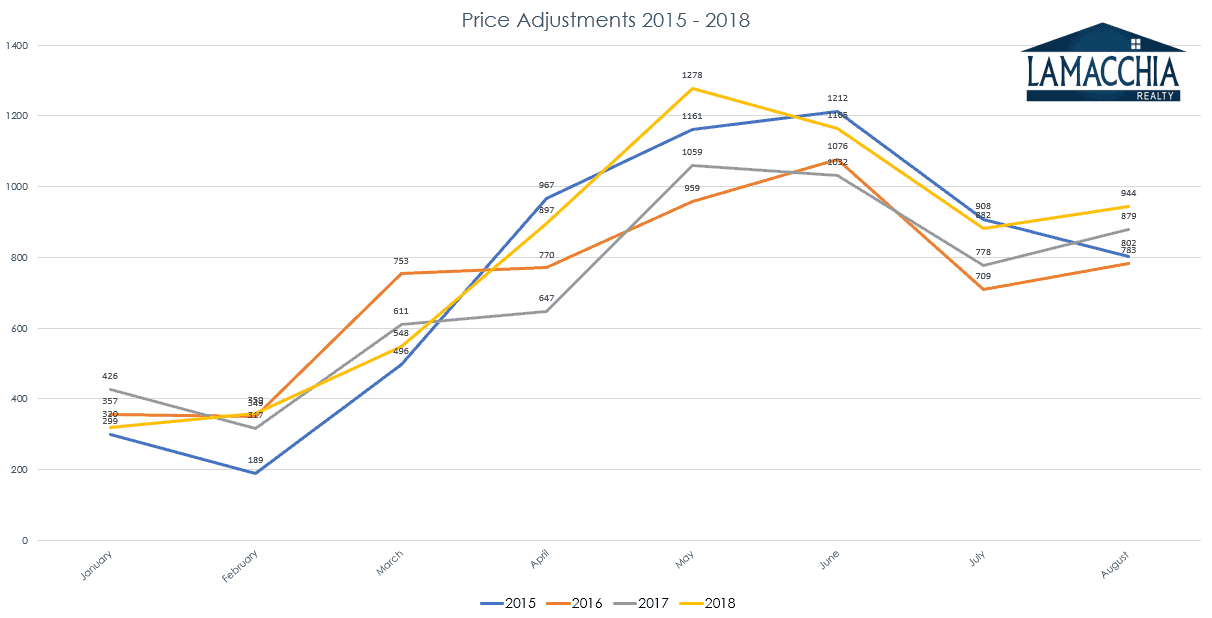 Even though we have an abundance of home buyers which create a strong demand, interest rates have risen a point in the last year and that has had an impact because rising rates make homes more expensive. Right now, rates are averaging at about 4.75% compared to about 3.75% a year ago at this time. When rates rise, people cannot borrow as much because the monthly mortgage payment goes up. For example, if someone needs to borrow $400,000 and rates go from 4% to 4.5% their payment goes from $1,909.66 to $2,026.24- an additional $116.58 a month. If they go up a full point, it’s more than double. This is what causes borrowers to qualify for less which decreases the buyer pool.  The good news is we have had much more demand than supply for over 5 years, so it isn’t even close to truly slowing down the market, but it does decrease the demand, which has some impact.

This is truly wonderful news in many ways.  For one, even though there will still be plenty of bidding wars and buyers fighting over homes next spring, it will likely be less than this past spring.  In addition, it hits at a perfect time of year for buyers. Every single year I am very bold about telling our agents and homebuyers how August 1st to Thanksgiving is truly the best time to buy a home.  Inventory of homes for sale peaks, demand is lower and by fall, most but not all sellers have had a few months to realize that the market has changed a bit and they need to be reasonable about pricing.

After reading this many will ask me:

Is this the end of the road for rising prices?

Is the market headed for a crash?

My answer to all of that is NO. But I do think the lowest point of inventory is behind us.  When I study the last boom in the early part of the century, the numbers tell me we are right around 2000 or 2001 in the cycle. If you look closely at the graph below it shows the inventory of homes for sale in January of every year all the way back to 1995.  You can see that 2000 was the last valley for inventory.  It took until 2006 for inventory to substantially spike and it didn’t get really bad until September 2008.

At that time there were over 45,000 homes for sale in Massachusetts as shown in this infographic we released last week that also illustrates a number of other interesting stats pertaining to the financial climate. 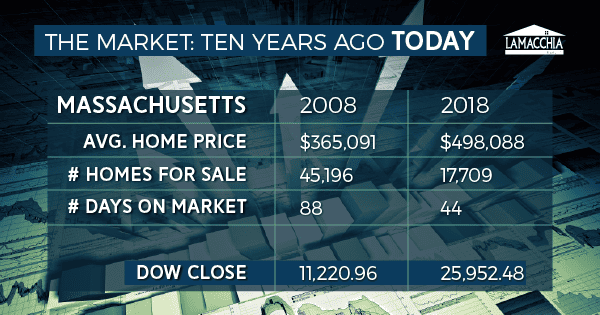 As you can see, we are nowhere near any numbers that could point to a crash in the market. In addition, the economy is red hot, the stock market is booming, GDP is higher than it’s been in years, wages are up, unemployment is low, homebuyers are plentiful, and the book of mortgages that have been written since 2010 is comprised of the strongest mortgages in years.  Given all of this, prices will continue to rise, although not as rapidly, at least for a while, and it will mostly continue to be a sellers’ market especially in the winter and spring months. However, buyers do have a lot more power than they have had since the fall of 2014 when the market was very slow.  Those who buy this fall will be happy they did because at this moment we are in a pretty balanced market that in some areas is leaning more towards a buyers’ market.  Those who wait until after the first of the year, when there are dramatically more buyers than sellers, will pay more. This is exactly why we always tell sellers to list in the winter to make more money.

Homeowners who want to sell and buy a bigger or smaller home should also use this time to make a move. So many have been holding off on listing because they are worried they won’t find what they want in time.  We call this “Worried sellers” or “Want to be Sellers”. We put out a great blog about it back in the spring and several videos to explain how it can be done if they go about it the right way.

In conclusion, I will say this.

Sellers have ruled the roost for a few years and even though I think things are still weighed a bit more in their favor, given the economy they need to be careful to not overdo it.  Yes, everyone wants to get as much money for their home as possible but when you go for too much and it doesn’t sell you end up getting even less.  Buyers should not overreact either.  It has always amazed me at how fast home buyers think they smell blood in the water.  This summer as things slowed but sellers continued to list at higher and higher prices, many buyers dug their heels in and lost out on homes they really wanted because they didn’t believe there was another buyer or didn’t go as high as the other buyer. Truth is there are still bidding wars on homes and you should put your trust into the agent that you hire and take their advice on which direction to go.