Our list of the Hottest Towns in Massachusetts for the 1st quarter of 2014 is here!

Of the 351 towns in Massachusetts, our report shows the Top 25 Towns with the largest increases in the number of home sales for the first quarter of 2014, a factor which we use to determine whether a town is becoming a sought after location for homeowners. We compiled data provided by The Warren Group that compares home sales from January 1, 2014 to March 31, 2014. Towns had to have a minimum of 25 home sales for the quarter to be considered for the list. 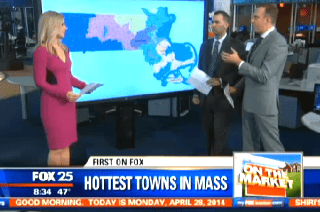 Here is our list of the 25 most popular towns in Massachusetts Real Estate for Q1 2014: Raynham tops our list with 29 home sales for the first quarter of 2014, an increase of 93% compared to Q1 2013 when there were 15 sales. 6 of these home sales were new construction. The median price for a home in Raynham is $280,000, an increase of 10% compared to Q1 2013, yet well below the average home price in Massachusetts. Raynham is an affordable, family-friendly town about 34 miles from Boston. The average property tax bill in Raynham is lower than the state average. A popular diner in Raynham is the Milk Bottle Restaurant, which is easily spotted from the highway by the 60 foot tall wooden milk bottle structure outside. With easy access to routes 495, 44 and 24, Raynham is a short commute to Providence, Rhode Island, and less than an hour from Boston or Cape Cod. The population of Raynham is 13,383, an increase of 14% since 2000. 46 homes sold in Duxbury, an increase of 77% compared to Q1 2013 when there were 26 sales, putting it at #3 in our list of hottest towns for Q1 2014. 6 of these home sales were new construction. The median price for a home in Duxbury is $420,000. Duxbury is a coastal town located in Plymouth County near Cape Cod with access to route 3. Duxbury is known for beautiful Duxbury Beach as well as several wildlife conservation areas. Visitors can access the beach by the Powder Point Bridge, a half-mile long wooden bridge, once the longest wooden bridge in the country. Duxbury High School ranked 10th in the US News and World Report’s list of Best High Schools in Massachusetts last year. The population of Duxbury is 15,059, an increase of 6% since 2000.

The town of Boxford has made our quarterly hottest list a few times and now makes our list once again with 26 home sales in Q1 2014, an increase of 63% compared to Q1 2013 when there were 16 sales. The median price for a home in Boxford is $545,000, an increase of 6% compared to Q1 2013. We enjoyed visiting Boxford last summer for our Fox 25 News Zip Trip. Boxford is a rural town in Essex County with scenic hiking trails, lakes, ponds, streams, and wildlife, yet with easy access to route 95, it’s just a 35 minute drive to Boston, making it a great town for commuters. Boxford has kept its rural character by requiring a minimum two-acre lot for each dwelling unit and having virtually no commercial development. Boxford High School ranked #22 on Boston Magazine’s list of top schools in 2013. The population of Boxford is 7,965.

34 homes sold in Holliston in the first quarter of 2014, an increase of 61.9% compared to Q1 2013 when there were 21 sales. 9 of these home sales (26%) were new construction. The median price for a home in Holliston is $374,000, a 23% increase over Q1 2013. Holliston is located in Middlesex County, the most populous county in New England, yet the town is committed to protecting its wildlife habitat, wetlands, and open space. Holliston High School recently ranked #18 on Boston Magazine’s top schools. One thing to consider is the average tax rate in Holliston is one of the highest in Massachusetts, at $19.88. Holliston is also known for its yearly event called Farm Days, where residents are invited to visit their local farms to listen to bands, sample foods, enjoy demonstrations, or take a hay ride. The population of Holliston is 13,547.

The town of Hopkinton is best known as the start of the Boston Marathon, when more than 30,000 runners arrive at the town common. The rest of the year the population is 14,925, which is an increase of 12% since 2000.  Hopkinton had 55 home sales in Q1 2014, an increase of 61.76% compared to Q1 2013 when there were 34 sales. 13 of these home sales were new construction including units at Legacy Farms and Deerfield Estates. The median price for a home in Hopkinton is $412,435. We visited Hopkinton for the Fox 25 Morning News Zip Trips. Hopkinton is conveniently located near the Mass Pike and route 495 so it’s a short commute to Framingham and Marlborough and less than an hour to Boston. Hopkinton High School ranked #28 on Boston Magazine’s top schools in 2013. Several companies have their headquarters in Hopkinton, including the data storage company, EMC.

In Norwood a total of 68 homes sold in Q1 2014, 58% more than in Q1 2013 when there were 43 sales. Median home prices in Norwood have increased 11% compared to Q1 2013, to $359,000. Norwood is located in Norfolk County, about 40 minutes from Boston. It has easy access to routes 1, 93, and 95. Norwood has one of the lowest property tax rates in the state, at $11.58. Norwood has a variety of attractions including the Luke Adams Glass Blowing Studio, which offers classes in glass blowing as well as the sale of products made in the facility. Norwood Theater in downtown Norwood recently underwent a multi-million dollar restoration and shows movies as well as musical performances, and you can even rent he space for special events. The population of Norwood is 11,227 in 2010, an increase of 7.33% since 2000.

Hull is a located in Plymouth County on a peninsula in Massachusetts Bay. 30 homes sold in Hull in Q1 2014, an increase of 58% compared to Q1 2013 when there were 19 sales. The median price for a home in Hull is $320,000. Hull has access to route 3A and also has ferry service Long Wharf in Boston, just steps from the MBTA. Hull is home to Nantasket Beach, one of the most visited beaches in the state. You can walk along the boardwalk or take a ride on the Paragon Carousel, built in the 1920s. Hull is also home to the historic Fort Revere Park which contains the remains of two seacoast fortifications, an historic water tower, and picnic facilities. Hull High School was named in the top 50 schools in Massachusetts by US News & World Report this year. There are 10,293 residents living in Hull.

A total of 79 homes sold in Danvers for the first quarter of 2014, an increase of 55% compared to Q1 2013 when there were 51 sales. 17 of these home sales were new construction condos located at The Residences at Rose Court. The median home price for homes in Danvers is $302,500. Danvers has many recreational areas, playgrounds, and parks, making it an ideal community for families. Danvers is home to North Shore Community College, one of the oldest community colleges in Massachusetts. Danvers is close to routes 1, 95 and 128. Danvers is our largest town in the top 10 with a population of 26,493, a 5% increase over 2000.

Swampscott moved up on our quarterly hottest towns list from #24 for the 2nd quarter in 2013 to number 10 for the 1st quarter of 2014. Swampscott had 32 home sales for the first quarter of this year, an increase of 52% compared to Q1 2013 when there were 21 home sales. The median price for a home in Swampscott is $325,000. The third of our top towns located in Essex County, Swampscott is a seaside community just 15 miles from Boston with a stop on the MBTA commuter rail. Swampscott has several public beaches and small parks and is home to the historic Mary Baker Eddy House. Swampscott High School ranks in the 2014 top 100 schools by US News & World Report. Swampscott has 13,787 residents.