The report shows the largest increases in the number of home sales, a factor which we use to determine whether a town is becoming a sought after location for homeowners. Towns had to have a minimum of 25 home sales for the quarter to be considered for the list.

These towns all have what home buyers are looking for: good schools, plenty of green space, proximity to highways, and affordability.

Watch John and Anthony Discuss The Hottest Towns in Massachusetts: 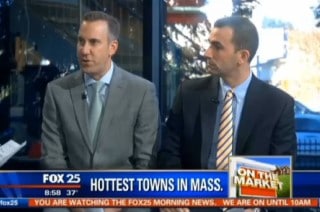 Here is a list of the 25 most popular towns in Massachusetts Real Estate for Q3:

Hopedale tops our list with 42 home sales in Q3, an increase of 121% compared to the third quarter last year. The median price for a home in Hopedale is $259,900, an increase of 21%. Located in the Blackstone Valley area of Worcester County, Hopedale is a small residential community with easy access to routes 495 and the Mass Pike. Residents enjoy visiting Hopedale Parklands surrounding Hopedale Pond. Hopedale is less than an hour’s drive from both Boston and Providence, Rhode Island. The population of Hopedale is 5,911.

Boxford made our 25 Hottest Towns list again this quarter, moving up from number nine on our list in Q2 to second in Q3. There were 40 home sales for the third quarter in Boxford, an increase of 100% compared to Q3 2012. The median price for a home in Boxford is $535,000. Boxford is a rural town in Essex County with scenic hiking trails, lakes, ponds, streams, and wildlife, yet with easy access to route 95, it’s just a 35 minute drive to Boston. Boxford was one of the towns featured in this past summer’s Fox 25 Morning News Zip Trips. The population of Boxford is 7,965.

41 homes sold in Townsend for Q3 this year, an increase of 95% compared to Q3 2012, putting it at number three on our list for Hottest Towns in Massachusetts. Homes in Townsend sold for $224,500, an 18% increase over Q3 of last year. Townsend is in northern Middlesex County. It’s a quintessential New England Town with a scenic town common, historic architecture, and plenty of green space including Townsend State Forest. The population of Townsend is 8,926.

The town of Holden comes in fourth on our list with 108 home sales, an 83% increase in the number of home sales for Q3. The median price for a home in Holden is $256,400, an 18% increase over Q3 last year. Located in Worcester County, Holden has an excellent school system as well as a full range of services including public water and sewer. Holden maintains protected open space, including the Trout Brook Recreation Area, with 660 acres of trails for walking, cross-country skiing and mountain biking. The population of Holden is 17,346, an increase of 11% since 2000.

Rutland had 26 home sales in the third quarter, an increase of 73% compared to Q3 2012. The median price for a home in Rutland is 272,500, 21% higher than the median price for a home in Q3 last year. Rutland is located in Worcester County and is near routes 190 and 290. Rutland State Park has 300 acres with developed facilities for fresh water swimming, picnicking and boating. Rutland has experienced a large population growth since 2000: there are 7,973 residents living in Rutland, a growth of 26% since 2000.

Home sales in Newbury increased 68% in Q3, with 32 homes sold. The median price for a home was $430,000, up 8% compared to the same period last year. Newbury is located along the Atlantic Ocean in Essex County. A portion of Plum Island is located in Newbury, making it a popular destination for tourists. There are several historic homes in Newbury on the National Register of Historic Places including the James Noyes House, built in 1646.  The population of Newbury is 6,666.

Boxborough moved up from number 12 on our 25 Hottest Towns List in Q2 to number 8 for the third quarter, with 37 home sales. The median home price for a home in Boxborough increased 305% to $405,000. Located in Middlesex County, Boxborough is conveniently located near routes 495, 111, and 2, and is less than an hour’s drive to Boston. Steele Farm is located in Boxborough which includes historic structures, trails, and protected grasslands. The population in Boxborough is 4,996, an increase of 3% since 2000.

Pepperell appeared in our 25 Hottest Towns list for the last quarter and is once again in the top 10 for Q3. In Pepperell a total of 43 homes sold for the third quarter this year compared to the same period last year, an increase of 65%. Median home prices in Pepperell have increased 34% compared to the third quarter last year, to $270,000. Pepperell is a quiet community that is dedicated to preserving its history and character. A portion of the 11 mile long Nashua River Rail Trail is located in Pepperell. The population of Pepperell is 11,497 a 3% increase over 2000.