There has been a tidal wave of reaction to last week’s election results and the housing market is no exception.  We are seeing mortgage interest rates climb and what potential home owners can afford is being impacted ever since the vote.
The average 30-year fixed loan was 3.59% early last week and yesterday it jumped up to 4.00%, an increase of about .41% in just 6 days. We were seeing the rates slowly climb before the election, but Trump’s victory amplified the activity. 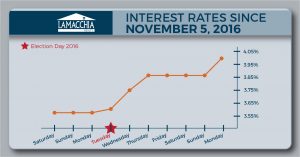 Rates have had the propensity to follow the stock market over the last five years; the better the market performed, the more rates would increase.  Conversely, rates would tend to decrease when the market displayed a decline. Last week was the single best week for the stock market in over five years and mortgage interest rates spiked right behind it.  Why the stock market went up is a great political debate that we won’t wade into but the fact is, investors now feel optimistic about the markets.  The more optimistic they feel the more they will invest in areas other than bonds. The more pessimistic they feel, the more they will invest in bonds which drives rates down.  This was exactly what drove rates down to three years’ lows over the summer when Brexit occurred.

If you are a buyer?

If you are lucky enough to have already landed a home and locked in your rate, then you are in good shape and have nothing to worry about.  If you are actively looking for a home and you have a pre-approval that is more than a week old it is time you speak to your mortgage broker and obtain an updated one. If you are someone that was pre-approved for the maximum you can afford, be prepared to understand that you won’t be able to afford as much now that rates are a half point higher because your payment will be higher.

Here is an example: 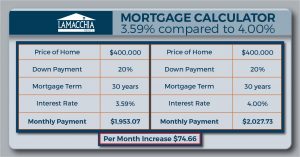 The fact is, this time of year is still a better time for buyers to buy than in the spring as we described in a blog last month Don’t Wait Until Spring, 4 Reasons to Buy Now.  If you are thinking of buying don’t be alarmed.  Historically speaking, mortgage rates are still extremely low.  If this still makes you nervous then speak with a lender about locking in at today’s rate and ask if they offer a float down program where you can decrease the rate if they start to decline again. For more information on these types of programs you can speak with our partners at Guaranteed Rate.

If you are a seller?

Some sellers may hear about rates and think it doesn’t impact them.  Think again! Remember the lower rates are, the more a buyer can afford. Therefore, this half a point increase does have a negative impact on affordability.  If there were eight buyers looking in your neighborhood now there may only be four.   Additionally, those four buyers are also thinking about how their payment will now be higher. This will make them less likely to come up on what they are willing to pay.  This doesn’t mean the market is crashing and we definitely do not recommend that sellers take their homes off the market because Homes Do Sell During the Holidays.

So what happens now?

Many are wondering if rates will continue to increase.  Rates will obviously stop increasing at some point but the question is when.  Historically, when rates shoot up like this it doesn’t usually last more than a few weeks but they don’t typically come right back down. We saw this in 2013 after the Federal Reserve tapered its quantitative easing program which caused rates to spike.  The good news is the housing market remains strong and housing inventory, even though it is higher right now than it has been most of the year, is still 20% lower in Massachusetts than it was a year ago which helps keep the market healthy.  Those who don’t like low inventory should remember that high inventory is what causes the market to crash.